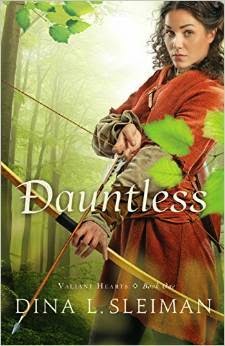 Timothy Grey, ninth child of the Baron of Greyham, longs to perform some feat so legendary that he will rise from obscurity and earn a title of his own. When the Ghosts of Farthingale Forest are spotted in Wyndeshire, where he serves as assistant to the local earl, he might have found his chance. But when he comes face-to-face with the leader of the thieves, will he choose fame or love?

I was not sure I would make of this novel before I read it. Dance of the Dandelion, the author’s debut novel published a few years ago really was not my cup of tea, but this one sounded promising and I had heard good things about it. I have to say I was pleased with what I read. It is a well written, Robin Hood like story plenty of action, adventure and romance, with a strong female lead, and a host of memorable and lovable supporting characters. I warmed to Allen- who I believe is the hero of the next story, and sweet little Wrenny.
The girl in a traditionally male role in the medieval period had the potential to be problematic- yet I felt that Merry Ellison’s personality and characteristics were generally plausible and fitted in with the time period. There is evidence that women could use bows, and even on occasion led forces of soldiers into battle. She is strong, independent and a leader, but it not too militant or feministic. Nor is she confident in her abilities to the point of conceit- but worked with men and was prepared to accept help.

I also felt that Mrs Sleiman carried off the English setting well. Some novel in this genre written by Americans tend to be peopled by ostensibly British characters who just don’t cut the mustard, because they are very Americanized in their speech or attitudes. Or else some writers just display an obvious lack of knowledge for British culture or geography. Yet this Brit can confidently assert that this was not the case here.

The romance was clean without being overly mushy, and the plot was straightforward enough for the genre without being too predictable or simplistic. Generally, the story also seemed to be historically accurate and authentic- though I was a little concerned by the reference to the works of Terry Jones in the historical note, who is not considered the most accurate or reliable source by many historians.

I did spot a few issues, however. One was the frequent mention of ‘Divine Right of Kings’, a concept which was actually invented by the Stuart Kings in the 1600s and did not exist in the Middle - Ages.
I also felt that Merry’s religious doubts seemed rather too modern- and I do think the character who has ceased to believe in God because bad things happened to them is something of a cliché of the Christian Fiction genre.
Her beliefs about equality of the classes and monarchy also seemed to owe more to the modern age than the medieval age. Having a Medieval character who cares for the poor is one thing, but a medieval person expecting their fellows to espouse democratic and egalitarian ideals is a bit much.
Also, I did think the idea that nobles could just have criminals summarily hanged didn't seem wholly plausible- I thought that even peasants were supposed to have some sort of trial in the local courts that existed at that time,

Other reviewers also raised issue with what seemed to me mysticism in this story. This was only mentioned once, and did not seem to be a prominent part of the plot. However, there were references to a little girl who could see 'Sunshine Men' that turned out to be guardian angels, and these entities were later involved in a healing miracle.
This may have smacked of mysticism, which I strongly disapprove of, but I did not have much a problem with it myself, as it did not seem as though the characters wanted to see angels- although the miracle seemed to be 'on demand'.
Finally, parents may wish to note there are some passing references to a character having fathered an illegitimate child, and having inappropriate liaisons with serving girls.

Generally, I really enjoyed this story and would happily read again and share it with a teenage reader.
I received an electronic version of this book free from the publisher and Netgalley for review. I was not required to write a positive one and all opinions expressed are my own.