Rest Not in Peace- Mel Starr 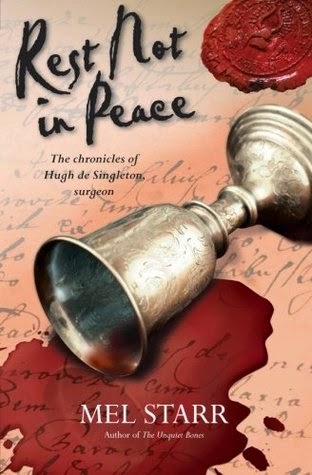 Master Hugh is asked to provide a sleeping potion for Sir Henry Burley, a friend and guest of Lord Gilbert at Bampton Castle. Sir Henry, (with his wife, a daughter by a first wife, two knights, two squires, and assorted servants), has outstayed his welcome at Bampton Castle.

The next morning after Master Hugh provides the potion, Sir Henry is found dead, eyes open, in his bed. Master Hugh, the target of the wife's wrath, is asked by Lord Gilbert to determine the cause of death ...

Rest Not in Peace was one of the better instalments in the Hugh de Singleton series. There were lots of twists and turns, suspects and motives, and the culprit was not immediately obvious. Sometimes I did get a little confused between the characters, and perhaps a tad lost, trying to remember who was who and what was what, but it was a generally believable and plausible mystery.
The next book in the series, which I read after this one, contained what I thought to be a major flaw in the information given to the reader, but I did not spot any such thing here.

Admittedly, Hugh was never the sharpest knife the drawer, and could have followed the lead he did to solve the mystery more quickly, but then there would be no story. Another reviewer remarked that it seemed rushed at the end- I am inclined to agree, as if the author was pushed to wrap things up.
Also, there were a few loose ends, but then I think all mystery and detective stories have these upon occasion. I found the religious content satisfying as well- although Hughs some of Hughs actions do not always sit well with his convictions, when there could be other ways of getting the information he needs.

The historical information was, as usual interesting, with the details about surgery- though most of it was focused on food in this one. I really should have made more use of the glossary, but with the PDF version it was not easy to keep flitting back and forth. Good for fans of Medieval and clean mysteries.

I received a PDF version of this book from the publisher, via Netgalley for review. I was not required to write a negative one and all opinions expressed are my own.