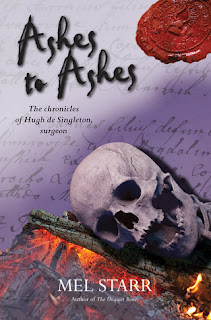 Master Hugh, Kate, and their children attend the Midsummer’s Eve fire. The next morning Hugh hears the passing bell ring from the Church of St. Beornwald, and moments later is summoned. Tenants collecting the ashes to spread upon their fields have found burned bones.

Master Hugh learns of several men of Bampton and nearby villages who have gone missing recently. Most are soon found, some alive, some dead. Master Hugh eventually learns that the bones are those of a bailiff from a nearby manor. Someone has slain him and placed his body in the fire to destroy evidence of murder.

Bailiffs are not popular men; they dictate labor service, collect rents, and enforce other obligations. Has this bailiff died at the hand of some angry tenant? Hugh soon discovers this is not the case. There is quite another reason for murder . . .

Although I’m a Cadfael fan, this was the only other Medieval Mystery series I had read until recently. I did recently make a foray into another popular series by an American author, but I prefer this one, as the other seemed a little too OTT.

There is something constant, comfortably reliable about The Chronicles of Hugh de Singleton. Those who have read other books in the series will expect not to find any deep political intrigue in the series, set as it is in fourteenth century rural Oxfordshire, with only occasional visits to the county town. Rather it focuses more on the lives and actions and concerns of more ordinary people, and tends to adopt a slower, gentler pace. The stories usually also involve the exploration of some moral or spiritual theme- as Hugh is a sympathiser of John Wycliffe.
Again, this is a detail I appreciate, considering that many works like this have characters who can be rather too modern in their outlook and attitudes, instead of seeing things the way people at the time might have done.

Some of the previous titles in the series (this is the eighth) have been a mixed bag, but I think the last three have been consistently good, exploring some local drama or family conflict alongside the crime. I for once appreciate how the author incorporates aspects of social, legal and medical history into the stories. Of course, the protagonist and sleuth Hugh de Singleton is a surgeon, and always gets at least one medical emergency, but there’s usually something else too. In this one, it’s a property dispute involving the inheritance of a manor. As I am currently researching Medieval Legal records relating to landholding, it was something that I could relate to and understand.

I did notice one historical error, a reference to the deposition of Edward II as having occurred 62 years before. The story is set in 1369, which would place the event in 1307, but that was the year Edward came to the throne, not the year of his deposition, which was 1327. Such mix-ups do happen, I just hope the quality of the stories and the underpinning research is not slipping, as I also noticed a few terms and phrases that seemed a bit too ‘American’ like ‘I was some taller’.
My only other issue was that I did not feel justice was entirely served, but Hugh was hampered by circumstances in this case, not being able to prove that certain parties were involved. That has happened before, in other mysteries, and I guess it could be a reflection of real life.

Other reviewers have mentioned that some of stories seem to be getting a little bit repetitive, and I am inclined to agree (Hugh gets beaten up again, when going home alone in the evening after investigating- really should have learned not to do that by now), but that did not detract from my enjoyment of the story. I think it may have something to do with the rather narrow geographical setting, and cast of characters. I hear, however, that the next book may be set in France, which might add a new and interesting dimension. I’m just glad that there is going to be at another book, as I had heard this was to be the last one.

I would recommend to lovers of more ‘cosy’ and light medieval mysteries, those who are interested in the period, and of course as those who are already following the series.

I received a copy of this book free from the publisher in the hope that I would write a review. I was not required to write a positive one, and all opinions expressed are my own.