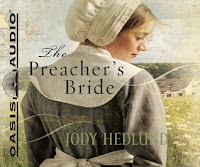 No matter the sacrifice, Elizabeth Whitbread would serve a wounded family. No matter the danger, John Costin was determined to speak God’s word.

Neither expected to fall in love. As enemies threaten to silence Costin - and those close to him - will following their hearts cost John and Elizabeth everything?

I must say first off, I really, really wish American authors would take the trouble to familiarize themselves with the governmental and political system of Great Britain and its history before writing anything that involves it in their works. I could say the same thing of social structures and heirarchy as well. I'm serious. This is meant to be a slightly modified version of the story of John Bunyan set a shortly after the end of the English Civil War.
Yet, throughout the two different sides are often defined in religious terms as the'Anglicans/Royalists' versus the 'Puritans'. The first problem is that the English Civil War, and the divisions on each side were not as clear cut as that. It was as much about politics as religion.
Not all of those who fought on the side of Parliament were Puritans, and nor was everyone in the nobility and gentry was on the side of the King. Most were, yes, but many of the poorest in society were also on the side of the King as well.

It annoys me intensely when groups of people or individuals are defined as 'good' or 'evil' on the basis of thier class, religious or political affliation.
This was very much the case here- all Anglicans and royalists were pretty much represented as evil, and most of the Puritans were really good and Sachharine sweet. I just think such depictions are naive and unrealistic, especially for Christians.
Now I will admit that Oliver Cromwell did a lot of good things, and the puritans had a lot of things right and were acting according to the parameters of acceptable behaviour at the time but they were not perfect- and they were not right about everything. Some historians argue that Cromwell ended up being as much of a tyrant as the King he deposed.

It also annoys me intensely when Britain in the seventeenth century (and even later) is described as if it were still some kind of backwards, Feudal state, in which there were Nobles, and peasants, and no social mobility. That is nonsense.
Feudalism died out by the end of the fifteenth century, and there were plenty of wealthy Middle Class people who were not of noble birth or background. Some of them were better off than the gentry, and it was possible to rise through the ranks......and seriously, I am beginning to wonder if some people have even heard of House of Commons.
Parliament does not consist just of the King and the House of Lords. Not all judges were nobles, nor were all lawyers. In fact most of them weren't.

Getting over that rant, this was a fair story and interesting- but incredibly frustrating in a lot of places. The historical background, and the use of court transcripts and quotes from the figures the characters were based on gave some authenticity- but the setting did not always feel 'real'. Another reviewer mentioned that it dealt with real issues that were faced by people of the time, such as child mortality and starvation. This is true, yet there was also a lot of reliance on unnecessary violence, or the threat of violence physical, and usually against the female characters, sexual violence.
The villain is almost ridiculously exaggerated in his badness, always leering, groping, or looking lecherously at Elizabeth. Can't authors think of anything els? What with that and all the beatings, domestic violence, assaults, attacks, or mentions of attacks, a flogging, two incidents of arson, and one brutal murder. Well you get the idea. It’s all a bit much, and I don't buy the argument that its 'historical realism'.
To say that is to make out that all past societies except America were quagmires of unbridled violence, abuse, corruption and lawlessness. There was law in seventeenth century Britain, there was a judicial system and a criminal justice system, and as others have again pointed out I very much doubt that the villain would have been able to get away with the things he did-especially since he was so obvious about it.

There was a positive Christian message, and the development of the relationship between the main characters was well-written (although there was a little too much fluffy Romancey type stuff for my liking. Kissing, touching, thinking about the former......) but I really did not enjoy this as much as I could have done.
It could be that it did not always ring true felt too forced, or that it was just wrapped up in too much melodrama. I've had similar concerns about other works by this author, and so it may just be that her style does not appeal to me.

So in a way I'm glad I listened to the audiobook. One can barely help but admire the courage and commitment of Bunyan and wife, but this was not a story I cared for all that much. I wonder if there are others, or a non-fiction work that would appeal to me more.