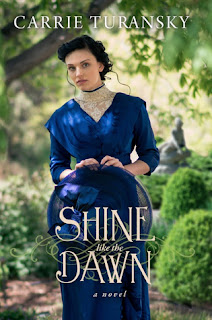 In a quiet corner of northern Edwardian England, Margaret Lounsbury diligently works in her grandmother's millinery shop, making hats and caring for her young sister. Several years earlier, a terrible event shattered their idyllic family life and their future prospects. Maggie is resilient and will do what she must to protect her sister Violet. Still, the loss of her parents weighs heavily on her heart as she begins to wonder if what happened that day on the lake . . . might not have been an accident.

When wealthy inventor and industrialist William Harcourt dies, his son and Maggie's estranged childhood friend, Nathaniel, returns from his time in the Royal Navy and inherits his father's vast estate, Morningside Manor. He also assumes partial control of his father's engineering company and the duty of repaying an old debt to the Lounsbury family. But years of separation between Nate and Maggie have taken a toll, and Maggie struggles to trust her old friend.

Can Maggie let go of the resentment that keeps her from forgiving Nate-and reconciling with God? Will the search for the truth about her parents' death draw the two friends closer or leave them both with broken hearts?

Shine Like the Dawn was probably by second favourite Carrie Turansky Novel (I think I enjoyed A Refuge at Highland Hall a little more). Providing a slow, placed and gentle read evocative of the time period- the opening decade of the 20th century, with hints of mystery and Romance.
It reminded of some of the classics, but also in some ways of the famous Northumberland author Catherine Cookson’s stories, but with less emotional angst. There was one scene near the end that seemed like a direct borrowing from one in Elizabeth Gaskell’s North and South, which was unfortunate as the book was original enough not to need that.

The characters well-drawn and even the antagonist, Nate’s stepmother changed towards the end to become more sympathetic and human. I like the idea of the Protagonists who had known each other since childhood, being thrown together again by unfortunate circumstances, and having to overcome their pride and wrongful assumptions about one another in the years that had kept them apart.

The inspirational themes were well woven into the story, with characters such as the local vicar and Maggie’s grandmothers providing much guidance and insight without seeming too preachy and out of place. Some historical details were also well-used to create conflict and drama, as well as a background for the characters.

One complaint was that whilst the often rugged and wild landscape of Northumberland came to play in the story, there was one way in which a sense of place was lacking. That was in the prominent accent and dialect spoken by those who live in the Region. This could have been represented with the working class characters using terms like 'Da' for Dad, or terms of endearment like 'pet' and 'love', which are common in the area.
The narrator of the audio version did a good job colouring the characters with a Northumbrian lilt, which was lacking in the text itself.

Aside from that though, the novel was an enjoyable light read. A follow up would be nice, perhaps featuring one of the supporting characters from this novel.

I requested this title from via the Blogging for Books programme. I was not required to write a positive review and all opinions expressed are my own.