The Reluctant Guardian by Susanne Dietze 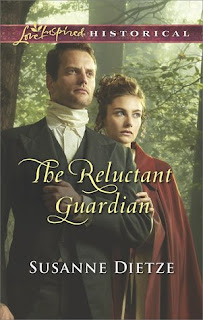 When Gemma Lyfeld inadvertently interrupts a dangerous smuggling operation in her English village, she's rescued by a mysterious Scottish spy. Now with criminals after her and her hopes for an expected marriage proposal recently dashed, she will make her society debut in London. But not without the man tasked with protecting her…

Covert government agent Tavin Knox must keep Gemma safe from the criminals who think she can identify them—a mission he never wanted. But as he escorts her and her rascally nephews around London, the lovely English lass proves braver than he ever imagined. Suddenly, the spy who works alone has one Season to become the family man he never dreamed he'd be.

Susanne Dietze’s first novel was also by first read from Love Inspired. I have had, mixed experiences, to say the least with many Christian Regencies. This one I did enjoy, with the witty banter between the characters, and the original plotline involving a smuggling racket, and an innocuous red cloak in the wrong place and time.
In some Regencies and Historical Novels there is little or no sense of place or period. You can look at maps all you like, but to me it felt like the author might have visited some of the places involved in the story, and it was fascinating to find out that one of the most important details was based on real events.

There was, I think, some danger with a Regency story involving a spy/smuggling plot for the protagonists to seem like ‘stock’ characters very much like those from other books just with different names. I did not find that here. Jemma and Tavin were both hurting people, struggling with mistakes from their past, but Jemma embraced forgiveness to make her a stronger person. Her love and devotion to her Nephews and remaining family (despite this being used to control her), was probably the defining point of her character. I think she became stronger as the story progressed, realizing she did not depend on the suitor who jilted her for her happiness. I did appreciate her romantic love of castles and ancient buildings, as well as her relationship with her friend Frances, who would now be called a ‘nerd’ for her interest in Roman artefacts. Guilty on both counts.

Tavin was not too stereotypically Scottish, in fact he tried to hide his accent to fit in, and I think his reactions and responses were realistic in the first part of the novel. There was no insta-love between him and Gemma, which meant it didn’t get too fluffy or corny, except towards the end.
The spiritual content was handled well, with the messages about forgiving oneself, and redemption, and I did not feel it came over as too preachy.

My only complaint, which applies to a lot of books honestly, was with the accents. It seems to me that some American authors use the same accent for all lower class British characters, regardless of time and location. An accent that usually involves frequent use of the word ‘Ye’ from Hampshire to Orkney, when most Southerners don't usually say that (except maybe in Devon). I think I picked up a couple of Americanisms here and there, but nothing too egregious.

I received an Ebook version of this title at my request, from the author. I was not required to write a positive one and all opinions expressed are my own.