The Pattern Artist by Nancy Moser 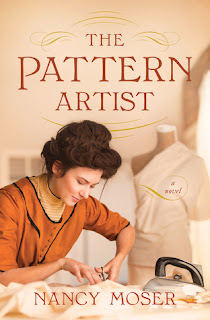 Born into a life of hard work, English housemaid Annie Wood arrives in New York City in 1911 with her wealthy mistress. Wide-eyed with the possibilities America has to offer, Annie wonders if there’s more for her than a life of service.

Annie chooses to risk everything, taps into courage she never knew she had, and goes off on her own, finding employment in the sewing department at Macy’s. While at Macy’s Annie catches the eye of a salesman at the Butterick Pattern Company.

Through determination, hard work, and God’s leading, Annie discovers a hidden gift: she is a talented fashion designer—a pattern artist of the highest degree. As she runs from ghosts of the past and focuses on the future, Annie enters a creative world that takes her to the fashion houses of Paris and into a life of adventure, purpose, and love.

A rags-to-riches story about a young woman from a humble background’s rise in the fashion industry in early 20th century New York- what could be better? Well, it depends on taste. I think this book would appeal to those who enjoyed TV series such as Mr Selfridge and The Paradise, which are both set in London department stores at about the same period. Personally, I just did not much care for this book (as I was not much interested in those series).
The synopsis attracted me, but I think a lot of the time it failed to really grab my attention. Annie Wood never came across as authentically British, and I found the comparisons between American and British culture annoying, even condescending at times.

Annie was meant to have been an extremely talented young woman whose meteoric rise resulted from this talent, but for all that, she often seemed to just drift along, rather passively, with her big breaks sort of falling into her lap courtesy of the Big American Dream.
The historical details were interesting, especially with the incorporation of things which the author did not plan for, the use of description to recreate the setting was also well done. However, I found that in the execution, this book dragged. Perhaps, as other reviewers said, there was not enough character development.
Most of them seemed a bit flat and bland, responding to situations it a rather insipid way. One of the most interesting was Danny, who would have done more, and made a very silly choice early on which resulted in an unsavoury turn of events.

There seemed to be a lot of ‘telling’ instead of showing, and it became rather repetitive in places. In a way, I think the novel would, and did appeal more to those who could directly relate to main plotline- clothing and fashion design. I’m interested in fashion, but the history of it just doesn’t interest me that much, and I have not designed clothing from scratch. I would consider reading more by this author, and perhaps buying this book if I saw on offer.

I requested a PDF of this book from Netgalley for review. I was not required to write a positive one and all opinions expressed are my own.