First Line Fridays #5 - The Message in a Bottle Romance Collection

Finally progress! Bread of Angels audiobook done, and Oswui: King of Kings finished.  I've finally made a start on a book I requested from NetGalley way back in January. I have not included the author in the title because it's one of those collections of short stories by multiple authors.
I have to confess: I requested it mostly for the first story: The Distant Tide by Heather Day Gilbert, a Viking Romance because her previous full-length Viking Era novel Forest Child won me over.

So currently I am working through the first of five novellas in the collection: it's enjoyable- but...  Yes, there is a but: I am concerned about the Historical details in the story. It's set in Ireland in 1170, something I did not realize: I thought it was set in the 9th century.
Vikings would be fine in the 9th century, but not in the 12th after what historians refer to as 'The Viking Age' ended. There were no more raids on England after 1066, and in Ireland, they stopped even earlier as the Vikings started to settle down, develop a more stable economy and become Christianized.

Also, the heroine and her family live in the inevitable castle- but there's only one problem with that: Castles were brought to Ireland by the Normans, the same people who introduced them to England after their famous victory at the Battle of Hastings. Hence, an Irish royal family at the time the Normans came to conquer Ireland a century or so later would not have been living in a big old stone castle.
So yes, it's a nice story; but it really should have been set a century or so earlier. I think it's a general problem with a lot of Fiction: that knowledge of the Middle Ages is rather limited, and the expectations of audiences mean that things like castles and Vikings can be dropped into just about any Medieval story, regardless of the historical context. Hollywood has been doing something similar for 50 years, so perhaps they are partly to blame.

I'm going to finish the story as a truly believe Mrs. Gilbert is a wonderful author, and read the others in the collection (it's extremely rare for me to ever give up on a novel), but historical accuracy is important to me. 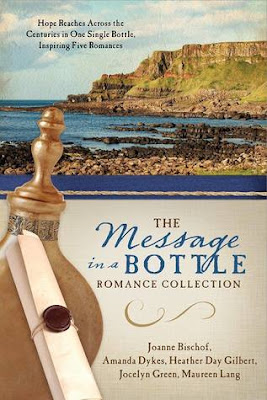 The first line from the Prologue (which introduces the Message in the Bottle which gives its title to the collection) reads:

Flames lapped at the monk's robes.

I apologize if this week's posts reads like a prolonged history lesson. I'll wrap up by wishing everyone a happy Friday from little old England.
Join the book fun by visiting the other member's links to see what they are reading.