First Line Fridays #6: Of This and Other Worlds by C.S. Lewis

I'm being a bit of a rebel today, and rather than including the book I am actually currently reading, including instead a book on my shelves that I have read or heard parts of and dipped into from time to time.  Of This and Other Worlds may be the seminal work on writing and modern literature by the great C.S. Lewis, known to most as the author of the Chronicles of Narnia. The Narnia books, however, represent only a tiny proportion of his works.  Lewis actually wrote extensively on theology, religion, literary criticism and Medieval and Renaissance Literature.

Of This and Other Worlds is basically a collection of essays and other writings spanning Lewis career, from the 40s to the early 1960s, including everything from a review of his friend J.R.R Tolkien's famous epic Lord of the Rings and George Orwell's work to a paper on ways of writing for children, a paper examining the then newly emerging genre of Science Fiction, and a reply articles and critical pieces he had read over the years. At just under 200 pages, it's a light read but contains some of his most profound thoughts and famous quotes. 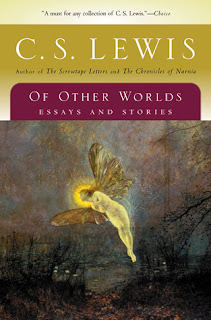 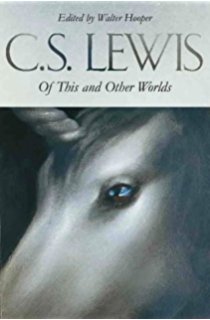 So today instead of including the first line, I am featuring two of my favourite lines from the paper called On Three Ways of Writing for Children:

"When I was ten, I read fairy tales in secret and would have been ashamed if I had been found doing so. Now that I am fifty I read them openly. When I became a man, I put away childish things, including the fear of childishness and the desire to be very grown up"


"Since it is very likely that they (children) will meet cruel enemies, let them at least have heard of brave knights and heroic courage"


It's not a new book and has been published and reissued several times over the last few decades, although I believe in America it goes under the title Of Other Worlds and contains a slightly different selection of Lewis' writings.

Good reading and happy Friday from little old England. As always, check out the links to see what the other members of the First Line Fridays group are reading.