Another week come and gone. The British weather didn't disappoint this morning, with a good old-fashioned downpour. Yesterday, I finally caught up on my Goodreads Challenge, after months of being behind. Isn't that great?

I'm still reading last week's book which is a paperback, but I like to read at least one Kindle book as well. So I've decided to turn my attention to the first novel in Jill Williamson's fantasy series The Kinsman Chronicles. I have literally had a Netgalley version of King's Folly on my Kindle for nearly 2 years. Sometimes it takes me ages to get around to books.

This series has actually been published in two different versions: as 3 full-length novels (the third one is due out next year), and also as a series of 9 shorter ebooks with each of the longer novels split into three parts. I sort of cheated as started reading King's Folly with the short ebook covering the first third of the story called Darkness Reigns. Truly it does.

Briefly, the series is a prequel to the author's King's Blood series which came out several years ago, set many centuries before. Although it adopts the traditional vaguely Medieval-ish setting for fantasy, many of the details are based on the peoples, cultures, and events of the Old Testament. So it's a polygamous culture in which the King has many wives and concubines.
The ending of the world of Armania with earthquakes and fleeing of the population could be seen as having certain parallels with historical events. 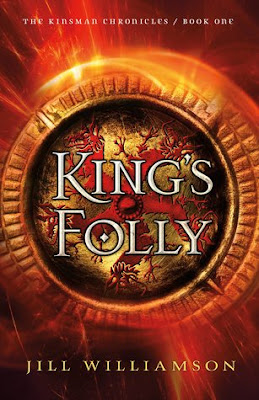 The first line (from the prologue) reads:

"Aldair Livina sat at the table in the great cabin of his privately owned ship, the Half Moon, looking over his most recent chart of the Eversea. After an eleven-night voyage north-northwest from the Port of Everton, he had discovered a new island."

Happy Friday reading from Old England (with a hope for the weather to improve for the rest of the day).
Don't forget to check out what the other members are reading. Next week, we are going moving to a new location and getting our own linky tools list based at a new blog called Hoarding Books.