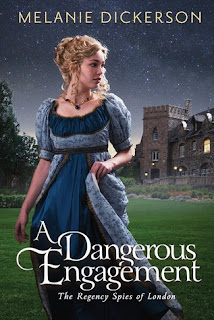 Just as merchant’s daughter Felicity Mayson is spurned once again because of her meager dowry, she receives an unexpected invitation to Lady Blackstone’s country home. Being introduced to the wealthy Oliver Ratley is an admitted delight, as is his rather heedless yet inviting proposal of marriage. Only when another of Lady Blackstone’s handsome guests catches Felicity’s attention does she realize that nothing is what it seems at Doverton Hall.

Government agent Philip McDowell is infiltrating a group of cutthroat revolutionaries led by none other than Lady Blackstone and Ratley. Their devious plot is to overthrow the monarchy, and their unwitting pawn is Felicity. Now Philip needs Felicity’s help in discovering the rebels’ secrets—by asking her to maintain cover as Ratley’s innocent bride-to-be.

Philip is duty bound. Felicity is game. Together they’re risking their lives—and gambling their hearts—to undo a traitorous conspiracy before their dangerous masquerade is exposed


Despite some weaknesses, A Dangerous Engagement was probably my favourite book in the Regency Spies of London trilogy. The writing style could be very repetitive, and the constant complaints about society’s expectations regarding marriage and rules imposed on women, which have been common to all the heroines of the series, were grating. I don’t like feeling that I’m being hit over the head with moral themes or modern judgments.
However, I liked the plot and the premise of this story, and it kept me interested to the end. I loved the hero Phillip, a younger son trying to find his place in the world who went into espionage to try to prove himself. Aside from the weaknesses outlined above, I did like the heroine Felicity as well, and her spinster Aunt who came into her own towards the end was a wonderful supporting character.

The tension and mystery in the story were very well-written, not dependent on a lot of action, but more on the situation and underlying sense of danger. There was murder, intrigue and a dangerous group of political revolutionaries following an unlikely female mastermind. I must confess to having smiled when the characters referred to their planned violent revolution as a ‘glorious revolution’. The Glorious Revolution is the name given to bloodless coup in 1688 in which the Catholic King James II was ousted by parliament in favour of his Protestant daughter Mary, and her Dutch husband William of Orange.

The ending built up the tension and danger well, my only complaint was the treatment of the romance, which became a little corny, with the characters falling in love based on looks. This bothers me because the female characters in books by this author will frequently complain if men are only interested in them for their looks, money, childbearing ability or political influence. But it’s OK for them to base attraction on such superficialities. I was glad that Philip and Felicity’s relationship developed to be more than just that by the end though to be based on character and mutual beliefs.

Altogether, I found this a satisfactory conclusion to the series and an authentic Regency novel. I requested the e-book from NetGalley for review and obtained the audiobook of my own volition. I was not required to write a positive review and all opinions expressed are my own.