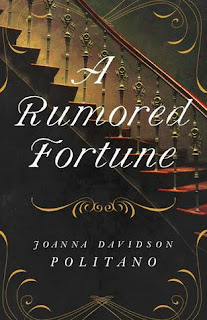 A lonely young heiress becomes the poorest wealthy woman in Victorian England when her father dies without telling anyone where he hid his fortune. Can Tressa and the no-nonsense estate manager find the fortune before the greedy relatives get to it first? Tressa Harlowe's father did not trust banks, but neither did he trust his greedy extended family.

He kept his vast fortune hidden somewhere on his estate in the south of England and died suddenly, without telling anyone where he had concealed it. Tressa and her ailing mother are left with a mansion and an immense vineyard and no money to run it.
It doesn't take long for a bevy of opportunists to flock to the estate under the guise of offering condolences.

Tressa knows what they're really up to. She'll have to work with the rough and rusticated vineyard manager to keep the laborers content without pay and discover the key to finding her father's fortune-before someone else finds it first.Award-winning author Joanna Davidson Politano welcomes readers to Trevelyan Castle, home of the poorest heiress in Victorian England, for a treasure hunt they'll not soon forget.

On one level, I liked this book better than Lady Jayne Disappears. The setting was atmospheric, and I liked the way that the family vineyard was used as a basis for moral and spiritual lessons. It was certainly a well-written story full of family drama and mystery, with plenty of twists and turns.

I also liked the central story line about a young woman who loved her distant father and her home, and only sets about finding the rumoured ancestral treasure to save it. She never expects to be confronted with some apparently shocking revelations about her father, and desires above all else to clear his name, so her image of him will not be shattered. Through the search, she learns to trust her Heavenly Father as well, and what real treasure means.

Maybe the hero was a little too perfect, and even Tressa at times. Another reviewer mentioned there were times when she wanted to shake her. Don't think I did at the time, but looking back, she was bit silly on occasion.

So why the lower rating? A couple of reasons. One was some apparent contradictions. Early in the story, I'm fairly sure it said Tressa and her mother had returned home after a long sojourn 'abroad': but afterwards it said they had simply been in London.
The constant Americanisms also contribute to it. The characters used the American 'trunk' and the British term 'chest' to describe wooden box believed to contain the family fortune interchangeably, sometimes in the same sentence.
Also, the characters sometimes referred to an area of the castle/stately home Tressa grew up in as a 'Hall Block'. I have no idea what that is. Is it a made up term? Never heard of anything called that before in a castle, or manor house, or any building, whatever its meant to be. The audiobook narrator was good though. Liked her West Country accent.

I requested this title from Netgalley, and purchased the Audible version of my own volition. I was not required to write a positive one and all opinions expressed are my own.