I have not posted in two weeks. But I have an excuse. Last week there was camp: we did not get to the destination until 9:30 pm. That morning I had a dental appointment, and then we got a puncture and so I almost did not get to my friends for the drive to Devon. Yeah, I have a good excuse.

So today, I'm finally back, and sharing a book I've been wanting to read for a long while. I heard about this title about the time it first came out in 2015, and I think I was offered the chance to review it, but declined.
Then a couple years down the line, I looked for it again, and the book seemed to have gone out of print,  but now its been republished and its back on Kindle Unlimited so I borrowed it. Introducing:

The Holy Lance: The English Templars 1 by Andrew A. Latham 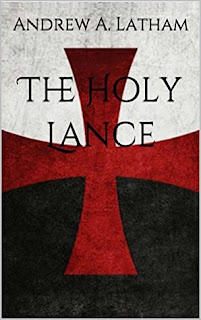 The year is 1191. A daring counterattack against the Saracens’ last-ditch effort to relieve the besieged city of Acre has not only saved the Third Crusade from a fatal defeat; it has also brought the leader of that counterattack, English Templar Michael Fitz Alan, to the attention of King Richard the Lionheart.
In the days that follow, the king charges Fitz Alan with a life-or-death mission – to recover the long-lost Holy Lance, a religious relic widely believed to be responsible for the near-miraculous success of the First Crusade.

The ensuing quest leads Fitz Alan and a hand-picked band of Templars on a journey deep into enemy territory, where they battle Saracens, Assassins, hostile Christians and even a traitor within their own ranks as they seek to return the Holy Lance to Christian hands and thereby ensure the liberation of Jerusalem and the success of the crusade

"Brother Michael Fitz Alan could not see the Saracen army, but he could hear both the rhythmic beating of its massive war drums and the unmistakable clamour of its warriors assembling in anticipation of the day's slaughter"

So, that's my contribution for this week. Don't forget to click the Meme to see what everyone else is reading, and comment with your own first line .