This week I am sharing the first line not from the book I am currently reading, but from a book I received recently, and hope to start reading soon. I'm going away next weekend, and this book is going to be coming with me.

Prince Edward's Warrant is the latest installment in the ongoing medieval mystery series, The Chronicles of Hugh de Singleton, Surgeon. Its the eleventh title in the series, and actually is not due for release in the UK the 24th August but thanks to the lovely team at Lion Fiction, I was sent a copy a couple of weeks early.

The Chronicles of Hugh de Singleton are literally one of my favourite series- ever. I'll happily gush about the books, and receiving the latest title in August or September has become one of the highlights of my reading year.
The series recounts the adventures Hugh, youngest son of a knight who becomes a  surgeon and bailiff in late 14th century Oxfordshire. Although two of the most recent stories have expanded the scope of the series to outside the county: one was set in France, and this one is set in London I think.

Master Hugh won the Black Prince’s* favour when he helped ease the prince’s illness. Now, in the autumn of 1372, the prince is suffering a relapse and sends to Bampton for Master Hugh to attend him. While at dinner in Kennington Palace, Sir Giles, the knight who escorted Hugh to London, is stricken and dies. Poison! Sir Giles is not popular, and there are many who would gladly see the fellow done away with… except for Prince Edward.

The Black Prince feels a debt to the slain man because of his heroic behaviour at the Battle of Crecy, where the knight stood firm with the prince when the fight seemed of uncertain outcome. Despite caring little for Sir Giles, Master Hugh must once again place himself in jeopardy and seek to uncover the perpetrator of the crime…

I have another little Meme for today's first line: 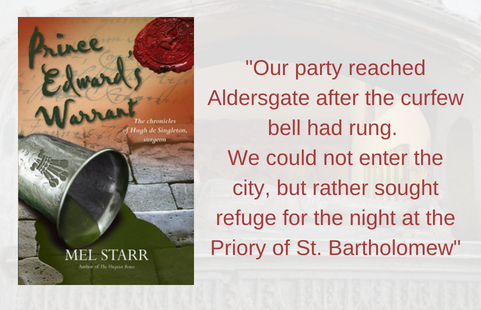 Remember to click the meme to see what the other members of the group are reading: or comment with your own First Line