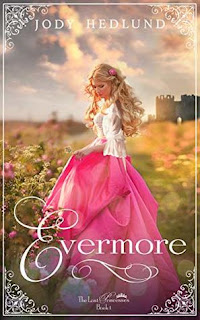 An ancient key. A secret treasure. And a princess destined to use them both to fight evil and restore peace.

Raised by a noble family, Lady Adelaide has always known she’s an orphan. Little does she realize she’s one of the lost princesses and the true heir to Mercia’s throne…until a visitor arrives at her family estate, reveals her birthright as queen, and thrusts her into a quest for the throne whether she’s ready or not.

Unable to tolerate King Ethelwulf’s cruelty and lawlessness, Christopher Langley left Mercia years earlier, training a group of rebels in neighboring Norland. When he returns home after his mother’s death, he discovers that not only is Adelaide all grown up, but she’s also the rightful queen of Mercia.

When King Ethelwulf discovers Adelaide’s location, he’ll stop at nothing to capture her and the key she holds to the ancient treasure. Christopher is just as determined to protect Adelaide so she can lead the growing rebellion. When feelings ignite between the two old friends, forces threaten to destroy their love and rip them apart forever.

So, to start with the positives: it was a good adventure story with interesting characters. I don't think they were as developed as I would usually want, but this is technically a Young Adult book.
Its probably the kind of story I would have really enjoyed as a teenager, with lots of action and a strong female lead. It also fills the niche in the market for clean YA fiction with positive spiritual themes.

The world building was also a little better in this story than the other Medieval series by this author: I think because its set up more as fantasy or an outright Fairy Tale, rather than the previous series which caused confusion by using real place names. That said, there there was a lot of telling rather than showing, which might have been a result of story being written in the first person.

However, I'm reading this as an adult, and there's a lot that fell short to me. First of all the battle scenes were terribly unrealistic. Sometimes to the point of laughable. All the bad characters seem to have really convenient gaps in their armour above their hearts or their neck: and nobody seems to wear padding underneath except the heroes in the jousting scenes.

I mean seriously, we're missing the basic point of armour here. It wasn't worn for fun, it was protection. The idea of highly trained warriors going out with the most vulnerable parts of their body uncovered is just absurd. Its obviously just done to make them easier to kill. 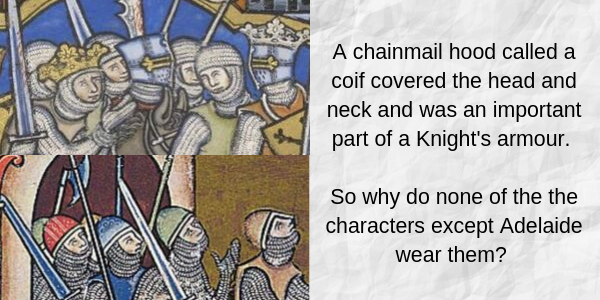 There's some really annoying misconceptions as well, such as the characters wearing armour ALL THE time. Even when they're out hunting or even eating inside their castle. Cops don't wear bullet proof vests when they're eating dinner at home, or going out with their kids. So why do we assume Medieval knights did?
I mean seriously. Chainmail is really uncomfortable. People took it off as soon as they weren't involved in combat anymore.

Finally, although I get the strong female lead bit, I really think this was rather overdone with Adelaide. She is the second 'warrior woman' character by this author and gets thrown in the deep end quite quickly impersonating a boy in a joust. I mean we get it. OK. Girls are just as good as boys. Really. We get it. We don't need to keep being told how Adelaide was great at fighting, training to use weapons ETC.

By the end of the novel, I felt this went from endearing, to an annoying modern feminist intrusion, where Adelaide literally thinks she can only prove herself as a worthwhile Queen and leader is by dressing in men's clothing and besting men in combat.
I really don't think its a great message to send to girls that to be 'strong' you have to act like a man. As if femininity is a bad thing to be shunned.