Flight of the Raven by Morgan L. Busse 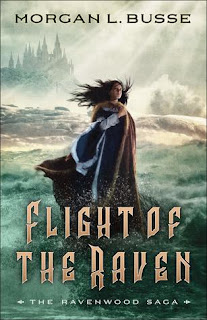 Selene Ravenwood, once the heir to House Ravenwood, is now an exile. On the run and free of her family's destiny, Selene hopes to find the real reason her family was given the gift of dreamwalking. But first she must adapt to her new life as wife to Lord Damien Maris, the man she was originally assigned to kill.

While adjusting to her marriage and her home in the north, her power over dreams begins to grow. As the strongest dreamwalker to exist in ages, her expanding power attracts not only nightmares but the attention of the Dark Lady herself.

With a war looming on the horizon and a wicked being after her gift, Selene is faced with a choice: embrace the Dark Lady's offer, or search out the one who gave her the gift of dreamwalking. One path offers power, the other offers freedom. But time is running out, and soon her choice will be made for her.

Book 2 was one heck of a ride. It has a romance, with the developing relationship between Selena and Damien: but also the growing sense of adventure and danger, with the threat of the Dominia Empire.

As this is fantasy, the powers of the different 'Houses' come into the story, and Selene is learning to come to grips with her own power as a dream-walker. Like all good fantasy stories, there is a struggle between good and evil.
In this case, it is largely Selena's as she struggles to let go of what she was taught and wants to use her power to help people, while struggling to be accepted in a new land.

The fantasy world-building continues, only in this one I think it was stronger and a little more credible. There was more background to the different families and Houses, and the source of their power.
Selena learns alongside the reader, which is a great way of developing the story and the plot.

Alongside the spiritual and fantasy elements, there is political drama, with the growth of an Imperial Conquering power that threatens all the people in the fictional world, as well as friction between and within the different families.
There a couple of fantasy tropes: i.e people fighting with swords but without shields (which were kind of vital in pre-modern warfare), wearing leather and able to endure combat for a longer period than someone would be able to in real life. But a lot of those are to be expected.

Honestly, when it comes to fantasy I am picky. I did not think I would like this series, but I liked the first novel, and this one is even better. The Ravenwood Saga is a Fantasy series I can recommend for all those who like the genre.

Thanks to Netgalley and Anne Rogers for allowing me to read the Epub of this title. I was not required to write a positive review, and all opinions expressed are my own.