Wind from the Wilderness by Suzannah M. Rowntree Review 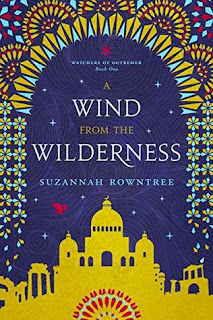 Hunted by demons. Lost in time.

Welcome to the First Crusade.

His family is ripped apart. His allies are slaughtered. And Lukas is hurled across the centuries to a future where his worst nightmares have come true...

Constantinople, 1097: Ayla may be a heretic beggar, but she knows one thing for sure: nine months from now, she will die. Before then, she must avenge her father's murder--or risk losing her soul.

Desperate to find their way home, Lukas and Ayla join the seven armies marching east to liberate Jerusalem. If Lukas succeeds in his quest, he'll undo the invasion and change the course of history.

But only if he survives the war.

Only if his enemies from the past don't catch him.

And only as long as Ayla never finds out who he really is.


I rarely finish a book of this length in 2 days (well really a little over 2), but I had the time and inclination. I actually only read it because I agreed to be an early reader on the second book and wanted to catch up

I'm glad I did. Wind From the Wilderness really was a breathtaking, thrilling, rollercoaster of a ride through period of the First Crusade . Readers be prepared: this is not your typical Historical fiction. It has Time Travel, and evil sorcerer alongside the labyrinthine politics of the Medieval Near East.
Throughout it all out hero Lukas Bessarion must survive in a culture and time entirely alien to him, and endure a grueling trek through the mountains and deserts of Asia Minor with the armies of the Baron's Crusade, enduring battles, physical privations and bullying whilst trying to figure out a way to get home. As well as coming to terms with his feelings for the Turkish girl Ayra.

Oh, and he's also being chased by an evil harpy demon in the form of a vulture that brings death and misery in its wake, whilst trying to find out the identify of the mysterious group known as The Vowed, who may be tied up with the fate of his family.

There are battles and fights. The former of which are meticulously researched. Honestly, I think this has some of the best and most accurate descriptions of 11th century French battle tactics I've ever encountered in fiction. What's more it avoids an overly partisan view of the Crusades.
So many authors choose to depict the Franks and Western Christians in a one dimensional way, as greedy and stupid religious fanatics, whilst the Byzantines are long-suffering Saints and the Turks Enlightened humanitarians reluctantly driven to give up their pacifism.

If the complex motives and personalities are anything to go by the Byzantines, Armenians and Turks were truly about as bad as each other.

The only concerns I had were few, and mostly about the theological treatment of different religions (mostly the treatment of Islam and Christianity as essentially the same).
Apart from these though, Wind from the Wilderness is a truly magnificent read. Much recommended.