Whenever we think of Medieval marriages, especially among the nobility we always think of forced or arranged marriages. I've said a few times that forced marriage is something of a misnomer.

Although its a common trope in fiction, it was actually forbidden under Medieval canon (church) law, and the church officially taught that a marriage could not be valid unless it was entered into with the free consent of both parties.

Even leaving aside forced marriage, one of the major tropes about Medieval marriages is that they were always arranged for political or socio-ecomonic reasons, and were always unhappy.  We've all read novels that feature them, admit it.

You see I don't believe all Medieval marriages, nor all arranged marriages were unhappy. There are actually a number of historical examples of such matches in which both parties found contentment, even love. 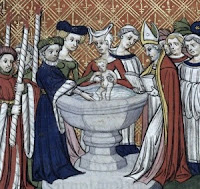 One such example was that of Edward III of England, who ruled from 1327-1377. He was married as a teenager to Philippa of Hainault, a Dutch princess of roughly the same age. According to accounts from the time, and even some of their own correspondence, Edward and Phillipa's marriage, which lasted over 40 years, was very happy and the two seem to have genuinely loved one another.
(Although Edward did stray towards the end of her life) and the couple had 9 children who survived infancy.

One of these children was their daughter Isabel. Named after Edward's own mother, the controversial Queen Isabella of France, she as the eldest of their four daughters.  Like most Medieval princesses, Isabella's parents entered into negotiations for her to marry when she was a teenager. First to the son of the Duke of Flanders, who reneged on the arrangement, defected to the French side, and then married another girl humiliating Isabella and her father. Eventually, they settled on Bernard d'Albret, the son of a French nobleman.

Yet that was where the normality ended. The marriage never took place. Evidence from the times suggest that Isabella initially favourted the match, going along with her parent's wishes like a good princess.
Until the last moment when she changed her mind. One story says that he 19 year old princess refused to get on the boat to France to meet her betrothed.
Isabella's father didn't mind. Not in the least. Isabella it seems, was known for being rather spoiled
and indulged by her parents. Perhaps this was just a chronicler's reaction to her later behaviour, but King Edward himself referred to her as his 'very dear eldest daughter, whom we have loved' in letters. Its even been suggested that she was Edward's favourite daughter and remained much closer to her father than her mother throughout her life.

A close relationship with her father, and a reluctance to leave her homeland to go to a country she did not know (and which her country was by then at war with) might well have explained Isabella's refusal to marry Bernard.
What is known is that after French marriage failed to take place, Isabella went back to live with her parents for another 14 years.  During that time 2 of Isabella's sisters died leaving her the only surviving daughter of King Edward.

Despite this, there is no evidence that her father put any pressure on her to marry, or indeed arranged an advantageous match for her. Her parents seem to have been quite content to have her live with them at their various castles and palaces in England. Indeed, they spent lavishly on her comfort and amusement. At one point paying for a balcony to be added to her room so she could enjoy a better view of the gardens.

Eventually, in 1365 at the age of 33 (positively ancient for the daughter of a Medieval King), Isabella did marry, but to a man of her own choice. Enguerrand de Coucy was another French nobleman, 7 years younger than her. The young and dashing French adventurer had ended up in the English court, as hostage for the King of France.  It was there that he and Isabella met.

Always eager to indulge his daughter, King Edward did not just approve of the match, he waived Enguerrand's ransom and even gave him an English title, Duke of Bedford.

Isabella did, ultimately, travel to France with her new husband, and after King Edward's death  in 1377, Enguerrand renounced all his English titles.
Its possible that his involvement in the Hundred Years war on the side of the French as well other military campaigns separated him and Isabel for long periods, during which she went back to England.
It was there that she died in 1379, just two years after her father, and was buried  in Greyfriars Church, Newgate in London.*

Isabel and Enguerrand had only two children, both daughters, named Marie and Philippa. Their later lives  reflected their parents' dual national origins. Marie was born in France, and married a French nobleman, but her sister Philippa who was only about a year younger was born in an English royal palace called Eltham, located in Greenwich.
She was named after her maternal grandmother, and went onto marry an English nobleman, Robert de Vere Earl of Oxford.

Princess Isabella, the 'most beloved' daughter of King Edward III was not the only one of the King's
children who chose to marry for love. His eldest son, Edward of Woodstock, Prince of Wales followed a similar course.
As heir of the King of England who vanquished the French King in the Hundred Years War, Prince Edward could have had his pick of European royalty. Instead, he married his English cousin Joan of Kent.

* Isabella's tomb sadly, does not survive. The Medieval Greyfriars church was destroyed in the Great Fire of London. Then the church rebuilt by Sir Christopher Wren was bombed in the Blitz.

Her father's tomb however, can be seen in Westminster Abbey and her brother's viewed in Canterbury Cathedral.