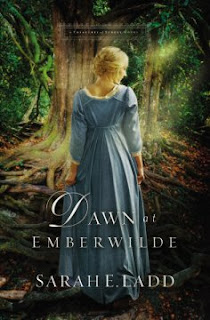 Isabel Creston never dared to dream that love could be hers. Now, at the edge of a forest filled with dark secrets, she faces a fateful choice between love and duty.

For as long as she can remember, beautiful and free-spirited Isabel has strained against the rules and rigidity of the Fellsworth School in the rolling English countryside. No longer a student, Isabel set her sights on a steady role as a teacher at the school, a safe yet stifling establishment that would enable her to care for her younger sister Lizzie, who was left in her care after her father’s death.


The unexpected arrival of a stranger with news of unknown relatives turns Isabel’s small, predictable world upside down, sweeping her and her young charge into a labyrinth of intrigue and hidden motives.

At her new family’s invitation, Isabel and Lizzie relocate to Emberwilde, a sprawling estate adjacent to a vast, mysterious wood rife with rumors and ominous folklore—along with whispers of something far more sinister. Perhaps even more startling, two handsome men begin pursuing Isabel, forcing her to learn the delicate dance between attraction, the intricate rules of courtship, and the hopes of her heart.

At Emberwilde Isabel will discover that the key to unlocking the mystery of her past may also open the door to her future and security. But first she must find it—in the depths of Emberwilde Forest.

I was not hugely impressed with the last book in this series The Curiosity Keeper, which I found a little bit dull. Thankfully Dawn at Emberwilde seemed to mark a return to the style of previous books by Sarah Ladd.
In a way it reminded me a little bit of The Headmistress of Rosemere, the second title in her previous trilogy, which I very much enjoyed, and revolved around some dubious activities centring on a Great House and a local School.
The elements of mystery and intrigue were worked well into the story- even though, as others reviewers have pointed out, they were not central to the plot and a little bit easy to work out.

I think I just appreciated this a steady paced, classic style Regency story with a cast of memorable characters.
The overbearing matriarch, the faithful and sympathetic cousin, the dashing and handsome suitors, who may or may not be quite what they seem.
I felt that I did not really connect with the characters in the last book, and was not really drawn into it, but I was with this one. Nor was it too mushy-gushy on the romance side. The protagonists' feelings begin as more of an admiration and mutual appreciation than anything else. Things got a bit cheesy at the end, but that's forgivable. Even the best stories have some cheese at times.
My only real complaint was a few Americanisms in the characters speech (things like 'closet' instead of 'cupboard' and talking about 'writing' someone instead of 'writing to' them). Aside from that that, I am happy to count this among my Regency favourites.

I received a free copy of this book from the publisher for the purposes of review. I also purchased the audiobook version of my own volition. I was not required to write a positive review and all opinions expressed are my own.