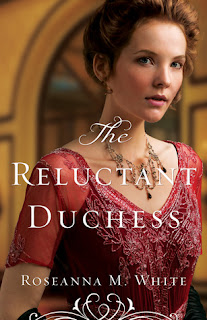 Lady Rowena Kinnaird may be the heiress to a Highland earldom, but she has never felt good enough—not for her father, not for the man she thought she’d marry, not for God. But after a shocking attack, she’s willing to be forever an outcast if it means escaping Loch Morar and the men who have jeopardized her life.

Brice Myerston, the Duke of Nottingham, has suddenly found himself in possession of a rare treasure his enemies are prepared to kill for. While Brice has never been one to shy away from manor-born ladies, the last thing he needs is the distraction of his neighbor, Lady Rowena, who finds herself in a desperate situation. But when the moody Earl of Lochabar tries to trap Brice into marrying Rowena, Brice finds he’s not as opposed to the idea as he expected to be.

Rowena wanted to escape the Highlands, but she’s reluctant to resort to marrying a notorious flirt just to gain his English home. And when she learns that Brice is mixed up in some kind of questionable business with a stolen treasure, she ’fears she’s about to end up directly in the path of everything she was trying to avoid.

I’m something of a new convert to Edwardian Fiction, and have not been a consistent follower of Downton Abbey, so it’s not always my ‘thing’. I did however, very much enjoy the last book in this series The Lost Heiress so I jumped at the chance to read this one.
I loved some of the characters. Brice was just adorable, and the absent-minded but cheery Ella was so endearing. It would indeed be hard to remain depressed for very long in the presence of people like them. I liked how the story carried on the subplot of the last one with the conflict over the diamonds, but in a lot of ways this was in the background. The main theme was Brice and Rowena’s stormy relationship.

In some ways, I commend authors who want to explore such subjects as the impact of emotional and psychological trauma and abuse. Yet I would say it depends on how it’s done. I don’t like to see totally unnecessary rape scenes in books, and I absolutely don’t support the use of such content simply to rank up the drama and tension. I don’t believe the author does this with the protagonists, but some of the themes might be hard to deal with for some readers. The attendant themes of grace, forgiveness and acceptance were also well handled even if some of the character’s behaviour was inconsistent. For instance, Rowena was not meant to be a confident person, and yet threw a hissy fit when she got jealous of her husband and thought he was trying to control her.

My main issues were with the language. I did not feel that the representation of the Scottish characters accent, dialect and some of their attitudes was entirely realistic. It’s all ‘Dinnae fash yerself lass’. Sorry, but as a Brit, who is quite used to hearing Scottish people speak, it just seemed exaggerated and very stereotypical. Dare I say more like how Americans think a person from the Highlands would speak then how they actually do? Seriously, not everyone in the Highlands speaks Gaelic (some actually speak a dialect that is heavily influenced by Old Norse), and not everyone speaks like Sean Connery or Gerard Butler. The present day Duke of Argyll, for instance, does not even have a ‘Scottish accent’ at all.
Also, what many American readers would think of as ‘Scottish’ terms and phrases are also used extensively in Northern England as well. Yes, you could hear people in rural Yorkshire saying things like ‘lass, aye and ye’. Finally, British people do not usually talk about ‘getting new drapes’ or ‘drawing back the drapes’. We call them curtains. Those kind of Americanisms stand out.

I did doubt that a Highland Earl of the early 20th century would have been quite so insular and narrow-minded. Rowena’s family for instance would refer to events like the Jacobite rebellion as recent history, when they had happened like 200 years before. I appreciate that there has always been and always well be a certain degree of friction between Scotland and England which really goes back to Anglo-Saxon times, but to me it did not seem to fit the setting and period. In one place for instance, Brice asked Rowena why she had not had many aristocratic suitors, and she said they were all English. Really? What about Wales and Ireland? Britain consists of three counties, it’s not a synonym of England.

Also, I found it took me a long time to get through this book. In part that was because of other commitments, but I did find it heavy-going in a lot of places. Perhaps it had to do with the depth and scope of the work, but it does not normally take me a month to get through a book like this. I’m not saying that’s a bad thing, but just noting it. I think I would read it again, but devote more time to doing so, and I am interested in the next and final book in the series due out in September.

I received a free copy of this book from the publisher via Netgalley (and also the paperback via their UK distributors) for the purposes of giving a review. I was not required to write a positive one and all opinions expressed are my own.