New Release- The Making of A Man- Rachel Rossano 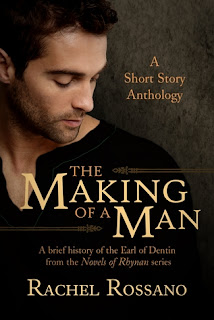 "The Earl of Dentin returns. Eight stories ranging from short story to novelette in length give us greater understanding into why Dentin is the complex and enigmatic man he is. It also includes new adventures that happen between Honor and the next Rhynan novel.

I probably was not the intended or ideal audience for this book, as I have not yet read the preceding books in the ‘Novels of Rynan’ series, and I was not familiar with most of the characters. I’m not a huge fan of fantasy, but I prefer it in this form- that is ‘Historical’ fantasy, which does not include mythical creatures or magic etc, but is rather like historical fiction with the exception being set in an invented place.

Rossano has created in Rhynan, and the surrounding states, an interesting and realistic medieval world with cultural mores, customs and laws that reflect historical reality (such as the fosterage of young boys from noble families with other families where they are taught to fight). There is feuding between noble families, and tensions between them and the King, a civil war, and mention of a Charter and expectations which those who rule are supposed to adhere to.

There are a number of things that put me off certain works of ‘Medieval’ fiction and are likely to result in lower rating, or ruin my enjoyment. One is the imposition of attitudes and values that stand out as very obviously modern (modern feminism, liberalism, republican or revolutionary ideals more akin to those of the eighteenth century and after), and without basis in the setting or period. Good fantasy is supposed to be self-contained and credible. A world with its own rules and norms- not modern people in fancy dress.

Thankfully, the author seems to have avoided such details in her work. Only a few beliefs of one or two characters seemed a little on the modern side, and I did notice a fair few modern terms and phrases and Americanisms. The word ‘Okay’ was used once (having its origins in nineteenth century Boston, it does not have a place in Medieval Fiction), but that might have been an oversight. Still I guess that’s to be expected in a book written by an American. There were no potatoes, which is a plus, considering how often these American plants are too often associated with the Medieval European (or European type) past.

The anthology consists of eight self-contained stories of varying length, involving some of the main characters from the full-length novels in which shed light on incidents in their lives, they meet their loves, or have various other adventures. All of them were interesting and I felt well written, despite some being very short. Some of the leading characters (who I suspect only have a role in the novels) were wonderful.
I liked the Earl of Dentin’s formidable cook Gelsey, and reading about some of her exploits.

Altogether, The Making of a Man is well-thought out collection of stories that complement the series well. Those who have already read the others will likely enjoy learning more about their favourite characters (as well being introduced to some new ones) and their imaginative world. Those who have not read anything else by this author might still enjoy these, but the stories probably make more sense in context.

I was given an electronic edition of this book by the author for the purposes of giving a review. I was not required to write a positive one and all opinions expressed are my own.