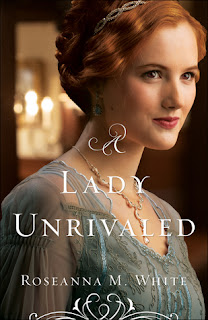 Lady Ella Myerston can always find a reason to smile--even if it's just in hope that tomorrow will be better than today. All her life everyone has tried to protect her from the realities of the world, but Ella knows very well the danger that has haunted her brother and their friend, and she won't wait for it to strike again. She intends to take action . . . and if that happens to involve an adventurous trip to the Cotswolds, then so much the better.

Lord Cayton has already broken two hearts, including that of his first wife, who died before he could convince himself to love her. Now he's determined to live a better life. But that proves complicated when old friends arrive on the scene and try to threaten him into a life of crime. He does his best to remove the intriguing Lady Ella from danger, but the stubborn girl won't budge. How else can he redeem himself, though, but by saving her--and his daughter--from those dangerous people who seem ready to destroy them all?

I’m a relative newcomer to Edwardian Era fiction, and thankfully I have been fortunate enough to pick some superb novels for my introduction to the genre. British Fiction written by American authors can in my experience be somewhat hit and miss. This trilogy was at the better end of the scale. I believe the main strengths were the solid characterisation and development, and a plausible setting. I understand that the author had not actually visited the places she wrote about until recently, but she certainly did her research.

As other reviewers have said, the developing relationship and chemistry between the leading characters, Ella and James Cayton were was very well written. We met both characters in previous instalments. Ella was the sweet if rather ditsy sister of Brice, an aristocratic friend and neighbour of the protagonists from the first book. Cayton was a cousin, known as a cad and a heartbreaker for his previous failed courtship of another relative.

The witty friction between them in most of their meeting and scenes together added a delightfully light-hearted and humorous cadence to a story that took on a gradually darker and dangerous tone with the actions of certain characters. Of course, Ella and Cayton were both initially in denial over their attraction, but the resolution did not come across as fluffy, trite or predictable (until a couple of passages near the end, when things started to slip a little bit).

Putting them aside, it was lovely to catch up with some of beloved characters from the previous stories, and see them relating so some of the new ones. The former ballerina Kira/Sophie allowed for some fascinating insights into pre-revolutionary Russian culture. Even for the ‘bad’ characters it was possible to sympathize with their plight and experiences. As another reviewer also said, the senstitive and realistic depiction of human nature, and religious content without preachiness is another strength of this series, and this book.

My only complaints were a few Americanisms in the characters’ speech and manners. British people- especially high class British people at the turn of the century would have said ‘curtains’ not ‘drapes’, and Autumn instead of ‘fall.’I understand these terms being used in the narration, but they’re unrealistic when they’re put in dialogue between British characters.
What's more, we do not take cream in tea, and would be horrified at being presented with a pot of cream on a tea tray instead of milk.
Nobody takes clotted cream in tea, it’s not suitable- it’s for cakes and scones. Finally, I did feel the resolution was a little predictable and overdone. Very similar to that of the last two books, it a lot of ways.

Despite these reservations though, I really enjoyed this book and the whole series. I would say it was one of my favourites in the trilogy, with a fitting and satisfying conclusion.

I requested an eBook edition of this title from the publisher via Netgalley for the purposes of giving a review, thanks also to Lion Hudson in the UK for giving me my lovely Paperback edition.   I was not required to write a positive review, and all opinions expressed are my own.