A Lesson in Love and Murder- Rachel McMillan 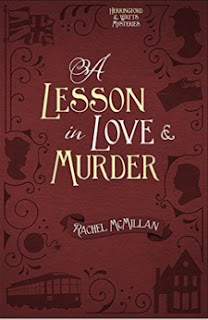 From political danger to personal drama, life is about to get explosive...

The legacy of literary icon Sherlock Holmes is alive and well in 1912 Canada, where best friends Merinda Herringford and Jem Watts continue to develop their skills as consulting detectives.

The city of Toronto has been thrown into upheaval by the arrival of radical anarchist Emma Goldman. Amid this political chaos, Benny Citrone of the Royal North-West Mounted Police arrives at Merinda and Jem's flat, requesting assistance in locating his runaway cousin—a man with a deadly talent.

While Merinda eagerly accepts the case, she finds herself constantly butting heads—and hearts—with Benny. Meanwhile, Jem has her hands full with a husband who is determined to keep her out of harm's way.

As Merinda and Jem close in on the danger they've tracked from Toronto to Chicago, they uncover a sinister plot to assassinate presidential candidate Theodore Roosevelt. Will they be able to save the day and resolve the troubles threatening their future happiness before it's too late?

Independence, love, and lives are at stake in A Lesson in Love and Murder, the gripping second installment of the Herringford and Watts Mysteries series

I enjoyed this a little more than the last one. Seeing the return of the quirky but strong minded heroines was good, and there was good chemistry between Jem and Ray, and even Merinda and Benny. Also the secondary relationships between the protaganists were realistic and well written. One could really identify with Ray's struggle between helping his sister, and his last semblance of loyalty to her husband and his former friend Tony. Oh, and there were Mounties, as is Due South.....oh I liked that series.

However, I found the whole think a little confusing. I had to go back a couple of times to keep up with what was going on. This may in part have been caused by the Kindle formatting (not showing seperators between sections for instance), and so fast-paced it could almost be exhausting, as another reviewer remarked.

As with last time, I don't think I ever entirely warmed to some of the characters. Jemima is enigmatic and smart, but frustrating. Merinda often just frustrating. She's meant to be a strong woman, but its like she barely wants to be female. Also they both came across as selfish and silly at times (to prove how strong and independent they were?).

Overall though, it was an enjoyable, solidly written mystery with real touches of humour and a credible setting. I just tend to prefer my historical mysteries to be a little steadier in thier pacing, and to get more immersed in the setting. Not being American or Canadian works against me with stories like this I think. Recommended as a fun, quick read for mystery buffs who like unusual or unexpected detectives.

I recieved a free PDF edition of this book in the hope I would write a review. I was not required to write a positive one and all opinions expressed are my own.