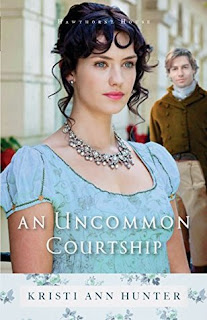 Life for Lady Adelaide Bell was easier if she hid in her older sister's shadow--which worked until her sister got married. Even with the pressure of her socially ambitious mother, the last thing she expected was a marriage of convenience to save her previously spotless reputation.

Lord Trent Hawthorne couldn't be happier that he is not the duke in the family. He's free to manage his small estate and take his time discovering the life he wants to lead, which includes grand plans of wooing and falling in love with the woman of his choice. When he finds himself honor bound to marry a woman he doesn't know, his dream of a marriage like his parents' seems lost forever.

Already starting their marriage on shaky ground, can Adelaide and Trent's relationship survive the pressures of London society?

I could have loved this book, I really could. There was a lot to like in it. I loved Trent Hawthorne, another slightly eccentric and socially awkward character, and Adelaide, who was also something of a misfit with clumsy streak (yeah, I really identify there).
It was all about two characters who married in less than desirable circumstances learning to love one another, with all their foibles. There was plenty of wit and humour, especially involving Adelaide's mother who was- for lack of a better word- a total harpy.

However, there were two elements that ruined it for me. First was the matter of the consummation. The scene itself was not nearly as graphic as I had expected from some reviews, not at all really. Yet the characters went off and discussed it with family members afterwards. This made the whole thing embarrassing and really, awkward for the reader as well as the characters

The other major complaint I had was with the language. Again, as with the previous instalments, this Regency novel was riddled with Americanisms. I can ignore these if they are not too obvious, intrusive or only in the narration instead of the character's speech, but that was not the case here. I would be getting into the book, and then another Americanism would just knock me straight out of the story.

British people don't say 'fix tea' or 'fix breakfast'. They say make or prepare tea- fix means something different in Britain. Also, please, for goodness sake, I once again implore American authors to stop writing about Brits putting cream in tea. We don't. If what is meant by 'cream' is thick, whole milk call it milk. Not cream.
Back to the matter of the language, we don't usually say 'gotten' all the time, and we don't say 'drapes' or 'candies' We say 'curtains' and 'sweets'. Regency ladies did not ‘write their mothers', they wrote to them.

I don't deny that this author worked hard on this series, and generally she did a good job, but she would really benefit from a British beta reader, who could spot that sort of things, because sadly this Brit found the constant use of American terms and phrases not just jarring, but really grating.
Overall, I did enjoy this book, I like the characters, and I will read the next one, but I'm not sure I would want to spend money on the paperback. Maybe the Kindle edition. Without some of the problems above, this series could be comparable to the Greats of the Christian Regency genre, but sadly feel short.

I requested an electronic copy of this book from the Publisher via Netgalley for review. I also purchased the paperback of my own volition. I was not required to write a positive review and all opinions expressed are my own.