The Dog Who Was There- Ron Marasco 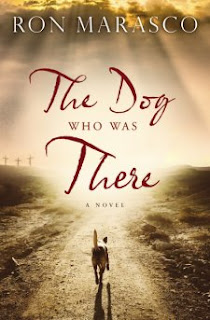 No one expected Barley to have an encounter with the Messiah. He was homeless, hungry, and struggling to survive in first century Jerusalem. Most surprisingly, he was a dog. But through Barley’s eyes, the story of a teacher from Galilee comes alive in a way we’ve never experienced before.

Barley’s story begins in the home of a compassionate woodcarver and his wife who find Barley as an abandoned, nearly-drowned pup. Tales of a special teacher from Galilee are reaching their tiny village, but when life suddenly changes again for Barley, he carries the lessons of forgiveness and love out of the woodcarver’s home and through the dangerous roads of Roman occupied Judea.

On the outskirts of Jerusalem, Barley meets a homeless man and petty criminal named Samid. Together, Barley and his unlikely new master experience fresh struggles and new revelations. Soon Barley is swept up into the current of history, culminating in an unforgettable encounter with the truest master of all as he bears witness to the greatest story ever told.

I was not sure about the idea of a story which covered the crucifixion and ministry of Christ through the eyes of a dog, but the story was well done, with plenty of sweet and endearing details which would appeal to dog lovers the world over. The author clearly understands our canine friends, the little Barley’s view of the world comes over as very plausible (smells and emotions- vitally important to animals with such a keen nose).

The reader can also really identify with the canine main character, moved with the emotion at the little dog’s sorrows, loss and struggle to find love and safety in the world, and feeling joy with this joy. However, the writing style did not entirely appeal to me. I believe this book was classified as general Historical Fiction, but it read like a story written for young adults, although there was more violence than some people would be comfortable with in that genre. Much of the characterisation (especially with the Roman soldiers) seemed very poor, almost cartoonish.

The depiction of the work and ministry of Christ in people’s lives, as well as the importance of forgiveness was great, but the who story seemed very simplistic, and the account of the crucifixion seemed to miss out parts (the Roman soldier saying ‘surely this was the Son of God) for instance. This would, as other reviewers suggested, be a nice book to share with young people and older children, and the animal protagonist might really appeal to them.

I requested an eBook of this title from the publisher from Netgelley for review, and purchased the audiobook of my own volition. I was not required to write a positive one and all opinions expressed are my own.