Welcome the the last First Line Friday post of 2018! Today I am going to be featuring a book that was actually published about in late 2017. I've only just got around to reading it now, as its been setting on by Kindle from Netgalley for a while.

Death at Thorburn Hall is the sixth and so fat the last title in American author Julianna Deering's series called the Drew Fathering Mysteries. The series is set in Britain in the 1930s, and features a minor nobleman and his American girlfriend and later fiance, Madelaine. 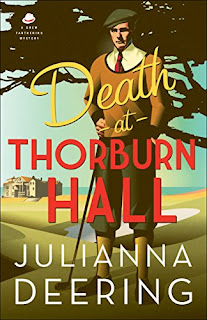 Drew Farthering arrives in idyllic Scotland for the 1935 British Open at Muirfield hoping for a relaxing holiday, but he soon finds a mystery on his hands. Lord Rainsby, his host at Thorburn Hall, fears his business partner may be embezzling and asks Drew to quietly investigate. Before Drew can uncover anything, Rainsby is killed in a suspicious riding accident.

Thorburn Hall is filled with guests, and as Drew continues to dig, he realizes that each might have had a motive to put Rainsby out of the way. Together with Madeline and Nick, he must sort through shady business dealings, international intrigue, and family tensions to find a killer who always seems to be one step ahead.

I've made a little graphic for today's first line, which works because its quite long. 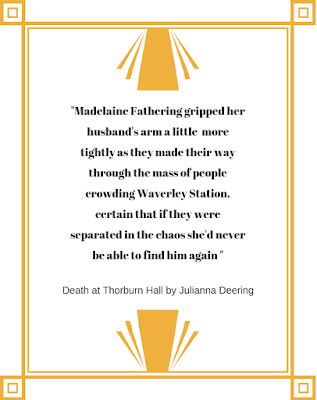 Happy (soon be be) New Year to you all.

As Always, don't forget to comment with your own first line, or click the graphic to see what others are reading.