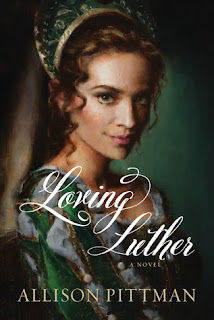 
In the dark of night, Katharina von Bora says the bravest good-bye a six-year-old can muster and walks away as the heavy convent gate closes behind her.

Though the cold walls offer no comfort, Katharina soon finds herself calling the convent her home. God, her father. This, her life. She takes her vows--a choice more practical than pious--but in time, a seed of discontent is planted by the smuggled writings of a rebellious excommunicated priest named Martin Luther. Their message? That Katharina is subject to God, and no one else. Could the Lord truly desire more for her than this life of servitude?
In her first true step of faith, Katharina leaves the only life she has ever known. But the freedom she has craved comes with a price, and she finds she has traded one life of isolation for another. Without the security of the convent walls or a family of her own, Katharina must trust in both the God who saved her and the man who paved a way for rescue. Luther's friends are quick to offer shelter, but Katharina longs for all Luther has promised: a home, a husband, perhaps even the chance to fall in love.

This was my second novel about Martin Luther and the woman who eventually became his wife, Katherina von Bora. I think I preferred his one overall, is it stuck closer to the facts, whereas the other was much more of a romance novel, and was way too dramatized with unnecessary rape and torture scenes.

I have not read anything by Allison Pittman before, but I would consider more of her work. I liked her detailed descriptions of landscape and the environment inhabited by the characters which helped bring parts of the story to life.

This focuses not so much on the Romance, but more on Katherina's life. She does not even escape the Abbey to which she was sent as a child until about one third of the way through. It is slow moving in places, and lags a little towards the end, but generally a worthwhile read.

I requested a copy of this title from Tyndale House via Netgalley a long while ago. I was not required to write a positive review and all opinions expressed are my own.