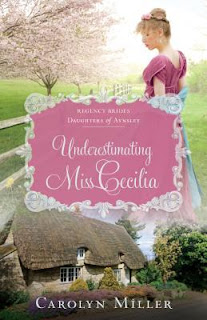 Will a shrinking violet and a prodigal son come together to better their world?

Cecilia Hatherleigh has many secrets in her shy, sweet heart--but none bigger than her unrequited love for Edward Amherst, the earl's son next door. Her love has persevered over many years, even when he grows to be a bit of a rake. Yet despite his fondness for females, he never seems to see her as anything more than the quiet younger sister, and nothing Cecy does has changed that. Rather than pining after his perhaps unworthy love, she decides to turn her focus toward living out her newfound faith. Now she's determined to follow God's leading to make a better world for the poor and dispossessed around her.

A London riot awakens Edward to the responsibilities due his family name. It's time to turn his life around to please his noble father--and that means restoring his abandoned legal career and making a marriage of convenience. Neither will be easy, given his past and the prejudices of the upper echelons of society to which he belongs.

When misadventure strikes at a house party, these two are thrown together even as their lives are upended. If Cecy can't trust God, overcome her shyness, and find her inner strength, the good work they've both done may be for naught-and neither will ever find true love . . .

Another great Regency from Carolyn Miller. Cecelia Aysley, the Middle child of her family is not he shrinking voilet she appears to be, but actually quite a determined young lady with the courage of her convictions. She just needed some encouragement to discover a cause to fight for.
She doesn't give up because it’s easy or comfortable: except in the case of Edward Amburst. I think she gave up on him rather too easily, and because of misunderstandings that could have been easily resolved.

Edward was I think my favourite character: he made a brief appearance in the last novel of the last series 'The Making of Mrs Hale' as a rakish aristocrat who courted scandal by stepping out with a married woman. Now he is transformed and has found faith: with Cecelia's inspiration he decides he wants to help the poor and marginalized people of Regency society. Including Gypsies and Irish migrants.
For much of the book though, Edward believes he must earn forgiveness, from God as well as his family to make up for his past misdeeds. He avoids Cecelia despite feelings for her, because he believes he doesn't deserve happiness.

One of the strengths of this author's books is the way the characters must work through real struggles and problems like this. This theme did allow for adding of certain historical details which enrich this series, including the Peterloo massacre of 1819.
It’s a very good book overall, I just wonder if too much was squeezed into it with all the political events and social commentary. Some of this involved a lot of telling rather that showing, just came across as a bit simplistic or not fully developed. Some events and people were just mentioned for a few scenes and then forgotten about. Perhaps the story was a little too ambitious in blending all the politics with a simple Regency romance.

That romance between Cecelia and Edward was probably the best part of this story, developing and burning slowly. I also enjoyed reading about Ceclia deepening her relationship with her younger sister Verity, seen as the Black Sheep of the family. Apart from Cecelia’s immediate family my only other minor niggle is that there were rather a lot of characters to keep up with in this novel, many of whom enter halfway or two thirds of the way through.
This book was still a four-star read, which fans of Carolyn Miller and Inspirational Regencies will enjoy.

I signed up for the Kregel Blog Tour of this book and was sent a copy. This did not influence my review and all opinions expressed are my own.