The Noble Guardian by Michelle Griep 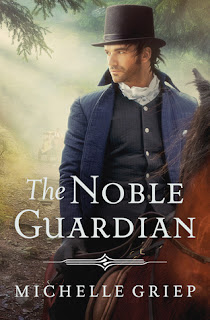 Life couldn’t be better for Abigail Gilbert—but it’s been a long time coming. Having lived with a family who hated her, love is finally within reach. Abby sets off on a journey across England to marry one of the most prestigious gentleman bachelors in the land—until highwaymen upset her plans and threaten her life.

Horse patrol captain Samuel Thatcher arrives just in time to save Abby. But to him she’s simply another victim in a job he’s come to despise. Tired of the dark side of humanity, he intends to buy land and retire.

Abby pleads with him to escort her on the rest of her journey. He refuses until she offers him the thing he desperately needs to achieve his goal: money. Delivering her safely will earn him more than enough to settle into a quiet life.

So begins an impossible trek for the cynical lawman and the proper lady. Each will be indelibly changed by the time they reach her betrothed, if they don’t kill one another first—or fall in love.


Its very rare to find a novel in this genre that shows the male hero on the front. Usually, they depict women in posh frocks, but I think the cover image fits the story. Michelle Griep doesn't write typical quaint Regencies: they usually delve into some aspect of social life, or little known historical details. In this series, its the Bow Street Runners, the forerunners of the modern police force.

There aren't many ballrooms, dances or parlours to be had here. Instead the Noble Guardian follows Daniel Thatcher and Abigail Gilbert on a journey across the country with every problem conceivable (and some more inconceivable) thrown at them along the way: bad weather, highwaymen, unreliable staff and guides. Much of the action takes places in Coaching Inns, an important part of the transport network before railways: peopled with some very colourful characters both savoury and unsavoury.

Daniel and Abby were both well written characters, a perfect contrast to each other. With Daniel's icy, no-nonsense cynicism coming up against Abby's sunny and optimistic personality.
Abby, despite her difficult family life tries to see the best in everything: although I think at time this made her too trusting and naive, even when it was obvious something bad was going to happen she's barrel straight into the situation.
Daniel I think was better developed. He could easily have become a common trope of the inspirational genre: the essentially admirable character rejected belief/lost their faith because of bad things happening and has to be bought around by the heroine. Daniel is not that. Despite being jaded, he does retain a strong faith throughout.

Also, whilst the Noble Guardian is a rollicking good read, full of romance and adventure, the plot is sort of contrived, and there are a lot of romantic tropes, as another reviewer has mentioned. Whilst the activities of the highwaymen added excitement and drama aplenty to the story, the secondary villain was just flat. More of a caricature and it was so predictable he would turn out to be that way.

My only other objection was that there were a couple of scenes that had this Brit cringing. I've mentioned before that one of my pet peeves in many Christian Fiction novels is social conventions, customs or little cultural details which are wrong.
One of the most common mistakes American authors make with the British setting, is having characters eating with only a fork in the American manner.
Nope. The social convention in Britain is to use a knife and fork. Now, I can overlook that if its only the odd passing reference, but here it was mentioned several times, and once apparently in the context of dining in a grand house among the gentry. There's no way the 19th century British aristocracy would have eaten that way.

I would recommend this to fans of the author and the genre with some reservations. I think its better to read this as part of the trilogy, and not just pick this one up first.

I requested a PDF of this title from Netgalley. I was not required to write a positive review and all opinions expressed are my own

Labels: Michelle Griep, Rating 3 and a Half Stars, Regency