The Heir of Logres by Suzannah Rowntree 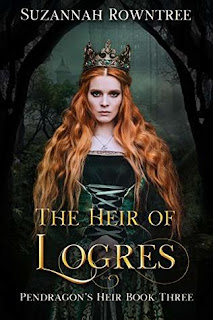 Camelot is falling. Can she save it?

Blanche braved the perilous realm of Logres. She survived Morgan le Fay’s assassins. She saved the Holy Grail from desecration.
Now she’s all set to face the court of Camelot and claim her rightful place as Blanchefleur, King Arthur’s daughter and the heir of Logres.

Until disaster strikes. Queen Guinevere is accused of adultery, throwing Blanche’s parentage into doubt...and plunging the kingdom into a civil war which could destroy everything she has come to love.

As the Round Table splinters, young Sir Perceval is torn between Sir Gawain, the father he idolises and Blanche, the lady he loves. Justice demands he take a side and fight against his swordbrothers. Will Gawain ever forgive him...or will Perceval have to fight his father, too?

When they learn that a single shadowy figure has been steering Logres toward destruction, Blanche and Perceval have just one chance to save Arthur’s kingdom. But as they try to unearth their enemy, courtiers and knights whisper the deepest, darkest secret of all.

Even if Camelot could be saved, is Blanche the one to do it?

Or is someone else the Pendragon’s heir?

Heir of Logres provided a beautiful and suitably epic ending for Suzannah Rowntree's retelling of the Arthurian Legends 'The Pendragon's Heir'. It comes with generous helpings of romance, twists and turns, and some unexpected allies.

Its Camelot, but perhaps not quite as we would know it: Mordred, Lancelot, Percival and Morgan le Fey are here, but their roles and personalities might not quite be what we have come to expect. Above all I think Heir of Logres was a story about new beginnings, second chances and redemption. One of my favourite quotes was:
“Tell us not to burn down a house before a better can be built. Tell us not to despise the day of small beginnings, or consider ourselves less fallible than our fathers.”

Modern people too often have the tendency to think we are better and superior than those who came before, and that we can build a perfect world by sweeping away the imperfect. How wrong we have been.

So really, I would conclude that this novel, and the Trilogy it concludes is an Arthurian retelling which has important resonances and carries lessons for a modern audience. The author has done a fabulous job of retelling the Medieval source material. Well and truly recommended.

I signed up to be an Advanced Reader of this title, I was not required to write a review and all opinions expressed are my own.