A Most Singular Venture by Donna Fletcher Crow: Review 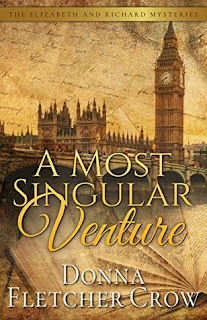 Richard is teaching Jane Austen as a Queen of Crime at the University of London while Elizabeth researches all the London sites Jane knew. A lovely interlude to their summer until Richard's brother Andrew shows up to bid on a set of Jane Austen first editions, a pushy student intrudes on their agenda and they become responsible for a young boy. And then one of Andrew's business associates is murdered and he is accused of the deed.
Elizabeth and Richard are exploring Jane Austen’s London, but their murderous opponent is all-too contemporary.

Another book from my Kindle backlog that I finally got around to reading this book. I've gradually worked through the last few books in this series over the last few years. I think I enjoyed the last two best, because of their English setting.

'Literary Suspense' is a good subtitle for these novels, which are mysteries but are also saturated in a background of 19th century American Literature and English Literature from Shakespeare to Sayers. Anyone can read them, but I would say you have to have read or at least be familiar with some of the authors to get all of the references.

The story in this one was a bit slow and towards the end I was sort of able to guess one of the culprits but not the whole basis of the mystery. I'm wasn't entirely convinced by young Jack, the 11 year old student who latched onto Elizabeth and Richard. Actually, it was mostly his language. Not many 11 year olds Britain in 2016 said something was 'wizard' to mean 'good' or amazing.
Last I was aware that term was used in the 1950s.

Otherwise though, A Most Singular Venture was a good suspense novel and a good choice for lovers of Austen and the classics and mystery authors.