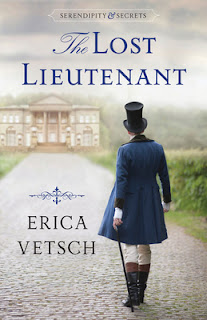 He's doing what he can to save the Prince Regent's life . . . but can he save his new marriage as well?

Evan Eldridge never meant to be a war hero--he just wanted to fight Napoleon for the future of his country. And he certainly didn't think that saving the life of a peer would mean being made the Earl of Whitelock. But when the life you save is dear to the Prince Regent, things can change in a hurry.

Now Evan has a new title, a manor house in shambles, and a stranger for a bride, all thrust upon him by a grateful ruler. What he doesn't have are all his memories. Traumatized as a result of his wounds and bravery on the battlefield, Evan knows there's something he can't quite remember. It's important, dangerous--and if he doesn't recall it in time, will jeopardize not only his marriage but someone's very life.

Erica Vetsch is another new author for me. I understand she has a short short in another collection I have not read yet (but really need to), but this is her first full length Regency novel.

All in all, it was very good. The hero Evan is a former soldier suffering from whet we would now recognize as PTSD who gets raised to the nobility by the Prince Regent. The heroine Diana comes from an abusive and unhappy family situation. I would say this is a romance that develops by means of a marriage of convenience story, as the characters get married less than halfway though.

There are elements of intrigue (with a possible spy) and plenty of secrets on both sides, as well as a number of challenges for the characters to overcome, including the restoration of a mansion in only a few months.
Whilst The Lost Lieutenant is an enjoyable story that will certainly satisfy Regency fans, it's often been said that one of the weaknesses of this genre is the lack of communication between characters. That everything could be resolved if they simply talked more.

I do feel this was the case to a certain degree, as chapters would often end with one of the characters going off in a huff and then basically giving one another the silent treatment for days or weeks on end, because of some misunderstanding that could easily have been resolved. Although interestingly the characters to actually express this sentiment themselves at he end (things would have been easier if they had confided in each other earlier).

Despite this one minor gripe though, I like this novel and found the depiction of the Prince Regent interesting. A character who the characters had to be loyal to, but was annoying and a bit of a buffoon at the same time, which is consistent with a lot of what I've heard about him.

I look forward to the next novel which is about Marcus Haverly, Evan's best friend who seems to know everything about everyone.

Thanks to Kregel for approving my request to read an ARC of this title. I was not required to write a positive review and all opinions expressed are my own.