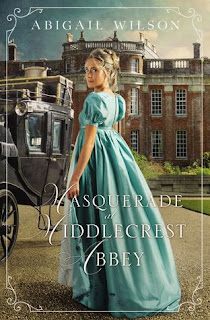 When the widowed Lord Torrington agreed to spy for the crown, he never planned to impersonate a highwayman, let alone rob the wrong carriage. Stranded on the road with an unconscious young woman, he is forced to propose marriage to protect his identity, as well as his dangerous mission.

Trapped by not only the duty to her country but her limited options, Miss Elizabeth Cantrell and her illegitimate son are whisked away to Middlecrest Abbey by none other than the elder brother of her son’s absent father. She is met by Torrington’s beautiful grown daughters, a vicious murderer, and an urgent hunt for the missing intelligence that could turn the war with France. Afraid of what Lord Torrington might do if he learns of her son’s true identity, Elizabeth must remain one step ahead of her fragile heart, her uncertain future, and the relentless mystery person bent on her new family’s ruin.

Masquerade at Middlecrest Abbey was another great Regency from Abigail Wilson, a relative newbie author. It is essentially a marriage of convenience story, but with espionage, mystery, a murderer on the loose and plenty of twists, turns suspense and surprises. (I do feel that he highwayman part could have been followed up a bit more. One of the characters is posing as one, and we get the impression that it's central to the story, but after the first scene, no more is heard of that.)

I will say that in some ways it seemed quite similar to the author's other two books, especially with the espionage story-line and the possible French spy. I got the impression though that this was intentional, and the espionage is meant to be an underlying plot line throughout the books.
Which makes sense, as Elizabeth Cantrell, the heroine in this story actually featured quite prominently in the first book The Shadow of Croft Towers. So although the books are not formally part of the series, there are connections between them.

Things were a little confusing at the beginning with all the different characters, servants friends and family members, but the main characters were well drawn. Adrian was one of those characters who defies appearances. Or rather, when the heroine cannot see his good points or cannot bring herself to trust him, the audience can see through his actions that he is a good man. A good man with a past admittedly, but a man who was probably more sinned against than sinning. (Which is not so say he was without sin).
It was also interesting to see Elizabeth come into her own, as she had previously been cast as quite a shallow and self-centered character. Although I would have appreciated being shown her love for her child a little more, rather than just told about it.

The faith elements were a fair bit stronger in this story than they were in first book. The central theme was truthfulness and trusting others, which the characters who had both suffered betrayals found difficult. Neither came to them easily or naturally, as would be expected, but developed over time.

Recommended for Regency Fans, and fans of clean reads. Although this one sometimes pushes the boundaries of 'clean' a , it never goes too far.

Thanks to Thomas Nelson and Netgalley for the PDF copy to review. I also listened to the audiobook of my own volition and all opinions expressed are my own.