That time of the week again, and I've managed to fall behind in my reading Challenge again, but I am making my way through two audiobooks and one paperback, so it's not because of laziness. Today also marks another milestone: The First Line Fridays group has a new home and we are including our posts in a new links list.

Today is also a first for me: I'm including a non-fiction title on this site which is not Christian, for like the first time ever. Those who follow me on Goodreads will probably have seen this title on there: it's a History book that I have been reading for a while. Not because its a bad book, but just because I only read a few pages every now and again in between other titles.

The Middle Ages Unlocked: A Guide to Life in Medieval England 1050- 1300. Well, the title is pretty self-explanatory, it's from a British Publisher, and the authors are Polish and Latvian scholars. I've always enjoyed reading about how people lived in the past, and not just about major political events, so a book that covers everything from law to clothing, building styles and the dietary habits of Medieval English men and women is ideal for me. 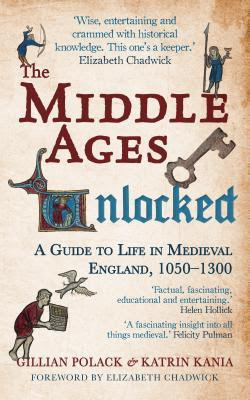 What's also interesting about this book though, is that it also examines the lives of the Jewish communities of Medieval England, alongside the English, Normans and other majoritygroups.
There were several thousand Jews in England until their forced expulsion in the late 13th century.

Today I am including two first lines, actually the first lines of the first two paragraphs, as I think this gives a better idea of what the book is about.

"So many people love the Middle Ages. Movies, books,  role-playing games and reenactment, these help us to enjoy - and shape how we see, the period.... The Middle Ages of our imagination of popular culture is not, however, always close the Middle Ages that historians and archeologists know."


That's my contribution for the week: from now on instead of the little list of links at the bottom we're going to be using the button below. Happy Friday from me, and remember to comment with the first line of the book you are reading.