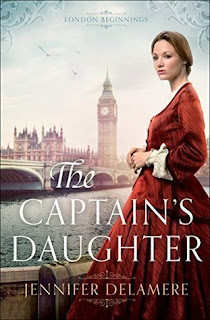 When a series of circumstances beyond her control leave Rosalyn Bernay alone and penniless in London, she chances upon a job backstage at a theater that is presenting the most popular show in London. A talented musician and singer, she feels immediately at home and soon becomes enthralled with the idea of pursuing a career on the stage.

A hand injury during a skirmish in India has forced Nate Moran out of the army until he recovers. Filling his time at a stable of horses for hire in London, he has also spent the past two months working nights as a stagehand, filling in for his injured brother. Although he's glad he can help his family through a tough time, he is counting the days until he can rejoin his regiment. London holds bitter memories for him that he is anxious to escape. But then he meets the beautiful woman who has found a new lease on life in the very place Nate can't wait to leave behind.

The Captain’s Daughter was an interesting story that worked some very interesting details into the plot: such as the work of the Victorian social reformer George Muller, and the popular composers and playwrights Gilbert and Sullivan. I didn’t know HMS Pinafore was originally written by them.

Much of the ‘action’ revolves around the heroine joining a theatre company and the lives of its members, as well as her relationship with two men: one an Anglo-Irish soldier on leave from India, and the other a charming young member of the company. Although I say ‘action’ this is not one of those fast-moving thriller type stories. It’s more a slow-paced, light historical fiction cum Romance.
The Romantic elements are not overwhelming, and the religious elements worked well into the story without being too preachy. My only complaints were that the dialogue did not always seem authentic for the time-period, and there were a few Americanisms. Londoners don’t and never have given directions by saying ‘two blocks away’. It’s not how we measure distance in British towns and cities. We also don’t say ‘someplace’. I did find those jarring at the beginning but got past it.

I would say that overall I prefer Sandra Byrd’s novels set in the Victorian period, as they tend to be more richly detailed and mysterious, but this one was still good. Probably just a matter of taste, as the former have more of a Gothic feel, and this one does not.

I requested this title from the Publisher via NetGalley. I was not required to write a positive review and all opinions expressed are my own.