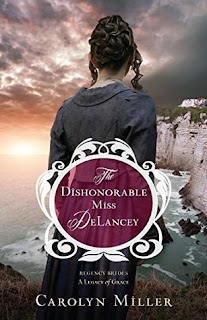 Will a damaged reputation and desire for society's approval thwart the legacy of grace?

Tainted by scandal and forced to leave London for the quieter Brighton countryside, the Honorable Miss Clara DeLancey is a shadow of her former society self. She's lost the man she loved to another and, in a culture that has no patience for self-pity, is struggling with depression. A chance encounter brings her a healing friendship with the sisters of an injured naval captain. But Clara's society mama is appalled at the new company she's keeping.

Captain Benjamin Kemsley is not looking for a wife. But his gallant spirit won't let him ignore the penniless viscount's daughter--not when she so obviously needs assistance to keep moving forward from day to day. Can he protect his heart and still keep her safe?
When they're pushed into the highest echelons of society at the Prince Regent's Brighton Pavilion, this mismatched couple must decide if family honor is more important than their hopes. Can they right the wrongs of the past and find future happiness together--without finances, family support, or royal favor?

I've had the pleasure of reading all three titles of debut author Carolyn Miller's Regency Brides: A Legacy of Grace trilogy since March, thanks to Kregel (and Netgalley in part).
The story has been told with the striking realism and humour the author has established in the previous two works; as well as a genuine treatment of the role of faith in the characters' lives, which does not degenerate into the preachy or contrived. Also, it has to be mentioned, that the cover is simply gorgeous.
A sunrise that would entice the photographer in the family. I'm also coming to appreciate the parts of this book which were set in Brighton, a popular seaside resort in East Sussex. I've only visited the city a handful of times, but I do remember some of the streets named, and its great to come across references to places I have actually been in a book like this. It just allows me to relate to it more.

Lady Clara DeLancey was a relatively minor character who appeared as the antagonist in the two previous titles. Making a hero or heroine out of an antagonist can be a challenge, but I think, in this case, the author has done very well.
The reader cannot help but grow in sympathy for Clara, and the circumstances (often beyond her control) that drove her to her previous deeds. In desperation, she sees the extreme which she has reached and wants to start turning her life around after she strikes up an unlikely friendship with a young woman she meets when her parents retire to their house in Brighton.
Much to the consternation of her family, Tessa Kemsley, the sister in law of the local vicar, is not a highborn  Lady, but Clara cannot seem to avoid her, or her brother Benjamin, a former sea captain and war hero: and a man who sees past the facades that the men and women of High Society erect to preserve reputations and hard-won connections. I had one or two quibbles with a couple of parts of the story, a few terms and phrases, and the ending bordered on being a little far-fetched, but nothing major.

I'd heartily recommend this book and the entire trilogy to anyone who loves Regencies, Inspiration or simply meaningful' historical fiction.
I requested this title as part of the Kregel Blog Tours programme (as well as an ebook version from Netgalley) I was not required to write a positive review and all opinions expressed are my own.