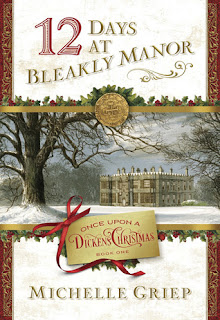 "A mysterious invitation to spend Christmas at an English manor home may bring danger...and love?

England, 1851: When Clara Chapman receives an intriguing invitation to spend Christmas at an English manor home, she is hesitant yet feels compelled to attend—for if she remains the duration of the twelve-day celebration, she is promised a sum of one thousand pounds.

But is she walking into danger? It appears so, especially when she comes face to face with one of the other guests—her former fiancé, Benjamin Lane.

Imprisoned unjustly, Ben wants revenge on whoever stole his honor. When he’s given the chance to gain his freedom, he jumps at it—and is faced with the anger of the woman he stood up at the altar. Brought together under mysterious circumstances, Clara and Ben discover that what they’ve been striving for isn’t what ultimately matters.

What matters most is what Christmas is all about . . . love"

It's not Christmas, its October, but I decided to read this alongside the audiobook borrowed on Scribd. The description of the book is pretty accurate, its pretty much like a combination of Dickens Bleak House with one of Agatha's Christie's darkest stories 'And Then There Were None' (which was originally entitled 12 Little Indians).

I'm rather in two minds about how some of the characters seemed to be directly lifted from Bleak House, especially Mr. Tallgrass (Mr. Bart. Smallweed, clearly was the inspiration there), and Miss Scurry with her mice, who was clearly based on Miss Flyte with her collection of prophetically named birds.
Whilst I am sure authors borrow from other works all the time, it's not something I'm always totally comfortable with when I spot it. This was still a great book though, and it does not detract from Dickens great tale. To be fair, its hard to beat the classics, so why not use them as an inspiration?

Aside from some of the inevitable Americanisms, and the American narrator of the audiobook who struggled with some of the accents, I did enjoy this book. A lot. Its great little short read for any time of the year, but also ideal reading on a long Winter night over the Holiday season incorporating intrigue, suspense, mystery, but also love and redemption.

I requested the ebook edition of this title from Netgalley for review. I was not required to write a positive one and all opinions expressed are my own.