A Conspiracy of Prophets by Suzannah M. Rowntree Review 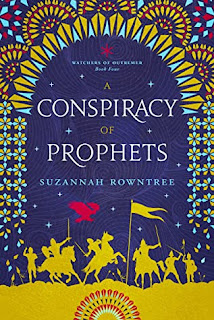 The last thing Lukas Bessarion wants is to warn the crusaders…yet if he refuses, a bloodthirsty demon will seize power.

Syria, 1098: After a gruelling siege, the crusaders finally capture Antioch—but within days, the besiegers become the besieged. Clawing for survival in a doomed city, the Franks turn to a new power for help: the mad prophet, Peter Bartholomew.

Plagued by his own unwanted visions, Lukas Bessarion knows the vicious Bartholomew is controlled by the demon Lilith, now growing in power. But none of the Franks—from naïve ladies to murderous counts and princes obsessed with political rivalry—seem worth saving.

Worse, if Lukas accepts his destiny as a prophet, he’ll need to renounce earthly power—like his father’s enchanted lance, hidden beneath Antioch. With the Lance, he hopes to avenge his beloved Ayla and lead his own people to victory.

But Lukas isn’t the only one who wants the Lance.

Lilith’s thirst for blood is insatiable. And to satisfy it, she will stop at nothing to gain control of Lukas, the Lance, and the entire crusade…

The Watchers of Outremer historical fantasy series continues with this dark and thrilling sequel to SPFBO finalist A Wind from the Wilderness!

A Conspiracy of Prophets is the Fourth novel in the Watchers of Outremer series, and continues the story of Lukas Bessarion, the eldest son of a Syrian Byzantine family who was catapulted forward in time when the magic ritual of an Arab sorcerer Khalil went wrong. He ended up 400 years in the future, in the midst of the First Crusade, with his home city facing invasion by hordes of "pilgrims" from France and across Europe.

Now, nearly a year later, Lukas is a lost soul. Following the murder of his beloved Aayla at the hands of the Frankish knight and his nemesis Everard le Puiset Lukas is bent on revenge. That and recovering the priceless artefact which his father recovered shortly before the catastrophic event which separated them.

The Bessarion Lance, which the Crusaders believed to be the famous Spear of Destiny, is closely guarded and in the hands of his enemies.

I would say that the two stories involving Lukas have been somewhat darker than the other novels in the Watchers of Outremer series, involving Marta and John Bessarion (Lukas’s sister and father) respectively, but it was nonetheless a wild rollercoaster of a ride through history and the complex web of shifting alliances and political intrigue. Did I say that before? Pretty sure I did.

Necessity, as the old saying goes, produces strange bedfellows, and so Lukas ends up helping his sworn enemy and befriending his sister, Emoleta, a young woman who is not a watcher, but appears to be a Prophetess, and has as much pain and darkness in her past as him. Just to add, I love Emoleta.

She's incredible, and I want to see more of her. I sincerely hope she returns in the Lukas next novel, but I am not sure I can wait three years to see her again!

As historical events and personal allegiances collide, the mythological and fantasy elements of this series come to the fore. One of the leading figures of the Crusade is under the influence of the ancient demon Lilith, who thrives on chaos, violence and evil and the character's battles begin to transcend the physical.

All the time, through the novel, one hopes that Lukas will make the right choices and conquer his own inner demons, but the path he chooses makes his ending uncertain.

What I do love is how the author managed to develop some of the secondary characters in the story, to the point that they actually emerged as more sympathetic if not likeable and more important to the narrative than Lukas, including the Le Puiset siblings.

I do personally wonder if that is one of the emerging themes of this story, that the characters choices can determine not only their destiny, but the fate of entire nations and peoples. As someone who has read history, I have a fair idea of what's going to happen when the Crusaders reach Jerusalem, but I wonder how the author will incorporate that into the story.

A Lukas seems to be morphing into something more like an anti-hero one wonders what the ending of his story will bring. It seems like there's no coming back from a shocking decision he makes towards the end of this novel (which I won't give away because it would be a major spoiler) but who knows how it will pan out?

Thanks to Suzannah Rowntree for sending me an ARC of her amazing novel. This didn't influence my review and all opinions expressed are my own.

Content warning: These novels cover territory that readers of traditional religious and Inspirational novels might find very dark. An ancient demon, Lilith appears in physical form and likes to tease and torment characters with her evil, their own actions, and her wicked, sardonic sense of humour (what else would one really expect from a demon?).

There’s a couple of references to her possessing people, and demigods from the ancient past also make an appearance. There are references to human sacrifice and other rituals, which whilst not graphic may prove disturbing to some readers, as well as some rather more graphic violence.

I don’t think the books in this series are suitable for preteens, and discretion is advised even fore some teenage readers.