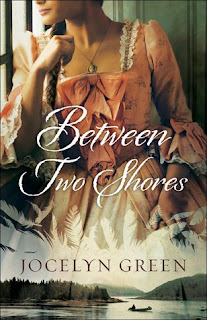 The daughter of a Mohawk mother and French father in 1759 Montreal, Catherine Duval would rather remain neutral in a world tearing itself apart. Content to trade with both the French and the British, Catherine is pulled into the Seven Years' War against her wishes when her British ex-fiancé, Samuel Crane, is taken prisoner by her father. Samuel claims he has information that could help end the war, and he asks Catherine to help him escape.

Peace appeals to Catherine, even if helping the man who broke her heart does not. But New France is starving, and she and her loved ones may not survive another winter of conflict-induced famine. When the dangers of war arrive on her doorstep, Cathering and Samuel flee by river toward the epicenter of the battle between England and France. She and Samuel may impact history, but she fears the ultimate cost will be higher than she can bear

I finally read this, after like two years. Between Two Shores was a really good book, and I think the standout aspect was that it turned out not to be a romance at all, at least not in the traditional sense or with the traditional conclusion.
Kind of like Great Expectations, it showed that you can love someone, without necessarily being together or acting on those feelings.

I have read two other books by this author, and I think BTS was the most complex in terms of storyline, characters, and the historical backdrop, but also the one I enjoyed the most. Katherine's character arc was incredible. Even Samuel's was, but to a lesser extent, and its really good how the conclusion was presented without vilifying him for his choices.

The only thing I found a little confusing was how the timeline kept jumping back and forth. Other that that though, it was a wonderful evocation of the lives of a family caught between two worlds and cultures, and later of a community torn apart by a conflict which was not of thier own making.

Thanks to Bethany House for approving my request for this title on Netgalley. I purchased the ebook of my own volition as well