Books I read Last Year: The Barrister and the Letter of Marque by Todd M. Johnson 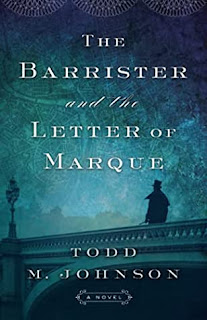 As a barrister in 1818 London, William Snopes has witnessed firsthand the danger of only the wealthy having their voices heard, and he's a strong advocate who defends the poorer classes against the powerful. That changes the day a struggling heiress, Lady Madeleine Jameson, arrives at his door.

In a last-ditch effort to save her faltering estate, Lady Jameson invested in a merchant brig, the Padget. The ship was granted a rare privilege by the king's regent: a Letter of Marque authorizing the captain to seize the cargo of French traders operating illegally in the Indian Sea. Yet when the Padget returns to London, her crew is met by soldiers ready to take possession of their goods and arrest the captain for piracy. And the Letter--the sole proof his actions were legal--has mysteriously vanished.

Moved by the lady's distress, intrigued by the Letter, and goaded by an opposing solicitor, Snopes takes the case. But as he delves deeper into the mystery, he learns that the forces arrayed against Lady Jameson, and now himself, are even more perilous than he'd imagined.

This book looked to provide a welcome break from my usual Regency romances, so I snapped it up (on Netgalley) quite quickly, and I am glad I did.
The Barrister and the Letter of Marque was something akin to a Sherlock Holmes Mystery crossed with a legal thriller. William Snopes, A London barrister (a type of lawyer specializing in courtroom advocacy and litigation) has to represent a noble client. As he looks into her case, he discovers dangerous secrets in high places.

The case involves a ship which engaged in privateering in the Indian Ocean. A Letter of Marque was essentially licensed piracy, allowing a vessel to sieze enemy ships and thier goods. Without it, such vessels and their crews could be arrested as pirates.
As the story, and the cast develops It turns out to be about a lot more than just a lost Letter of Marque. There are twists and turns aplenty, loyalties and relationships are tested, and there is a smattering of romance.

Although I did appreciate the "use" of place in this novel, and how it incorportated so many places, both inside and outside London, there were a couple of things which annoyed me. The tendency to include the noun "County" after the name of every other county.

Sussex County, Essex County, etc. That's not how place names work in Britain. Sussex and Essex are counties, but counties are ancient regional designations. Ergo, when someone talks about what county they come from, or are living in, they just say the name of the county.
They will simply say "I am from Lancashire", not "I am from Lancashire county" because everyone knows Lancashire is a county.

I'd certainly recommend this as an introduction to Todd M Johnson's work, and I think the author has gone through a lot of effort to familiarize himself with the workings of the English legal system.

Thanks to Netgalley for approving my request for this title. I was not required to write a positive review and all opinions expressed are my own.