A Defense of Honor by Kristi Ann Hunter Review 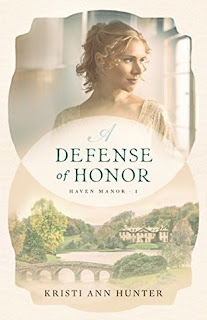 When Katherine "Kit" FitzGilbert turned her back on London society more than a decade ago, she determined never to set foot in a ballroom again. But when business takes her to London and she's forced to run for her life, she stumbles upon not only a glamorous ballroom but also Graham, Lord Wharton. What should have been a chance encounter becomes much more as Graham embarks on a search for his friend's missing sister and is convinced Kit knows more about the girl than she's telling.

After meeting Graham, Kit finds herself wishing things could have been different for the first time in her life, but what she wants can't matter. Long ago, she dedicated herself to helping women escape the same scorn that drove her from London and raising the innocent children caught in the crossfire. And as much as she desperately wishes to tell Graham everything, revealing the truth isn't worth putting him and everyone she loves in danger.

Well, this was certainly a very unusual Regency novel. Not many balls or engagements here.
Basically, Kit and her best friend Daphne fled from the censure of 'society' years before acquired a secluded manor house in rural Marlborough, where she lives 12 years later with Daphne, a Frenchwomen called Jess with a colourful past, and a passel of children, illegitimate and seemingly unwanted by their parents.

By taking in the children, Kit is and her friends see themselves as helping the aristocratic mothers, who would otherwise be shunned by society, and their children, who would face a bleak life.
However, she uses some rather dubious methods to support them, and has become so jaded by what she as seen that she has developed a bitter and twisted attitudes towards aristocratic men, believing them all to be worthless, irresponsible hypocrites and predators.

That is until Graham Wharton, the son of an Earl appears unexpectedly on the scene. Graham is a young man who is deeply bored with parties and balls and the normal activities of society, but also a deeply moral man who does not gamble or dally with young ladies.
He prefers to spend time with his two boyhood friends and sees an expedition to the country as a chance for an adventure.
The chemistry between the him and Kit was well-written from the start. Graham shows a better way, but still wants to help and his caring and largely non-judgemental attitude is key to moving the story on. It seems he is the father figure many of the children need, and the person to chip away at Kit's defenses by proving there are good and honourable men in the world.

His kindness and generally non-judgemental attitude is usually a winning one. Although he does call Kit out on her faults nearer to the end. By which time both and many important lessons about true love, redemption, healing and finding their place in the world.
Its just an very good story on a difficult subject, which is tightly plotted and well-told. Some might find this novel 'preachy' towards the end, and there is a lot of talk of prayers, but that goes with the territory in this genre.

I thought some of the passages which explored the spiritual themes were very good, and well handled. Kit was wracked with guilt over her past mistakes, which she felt had ruined her friend's life as well as hers, and saw what she was doing as a way of atoning for them: but also used that as a way to justify the less than savoury aspects of that.

My main complaints were all the Americanisms in the story. There were just so many, and I found them really jarring and annoying. Nor were they just in the dialogue with the British characters talking about 'going to the store' and 'giving candy' to the children.
It was in the mannerisms as well- there was a reference to Daphne teaching the children life-skills like 'how to hold their fork properly': because they all eat the American way with only a fork, and another reference to a character telling another their tea 'needs more cream'. No, it does not. Tea needs milk, not cream.

This author's works are far from the only Regency or British set novels riddled with Americanisms, but its as issue for me. I mean, I liked the book overall and look forward to the next one (Daphne's story!), but I do wish there was not this need for British characters to talk and act exactly like Americans in British Fiction.
What's wrong with being a little more authentic? I'm sure its not beyond the capacity of American readers to understand different words or mannerisms.

I was sent a free copy of this book via the Publisher's UK distributors, and purchased the audio-book of my own volition.
I was not required to write a positive review and all opinions expressed are my own

Labels: Kristi-Ann Hunter., Rating 3 and a Half Stars, Regency