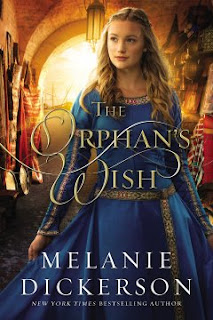 Orphaned and alone, Aladdin travels from the streets of his Arab homeland to a strange, faraway place. Growing up in an orphanage, he meets young Lady Kirstyn, whose father is the powerful Duke of Hagenheim. Despite the difference in their stations, Aladdin quickly becomes Kirstyn’s favorite companion, and their childhood friendship grows into a bond that time and opposition cannot break.

Even as a child, Aladdin works hard, learning all he can from his teachers. Through his integrity, intelligence, and sheer tenacity, he earns a position serving as the duke’s steward. But that isn’t enough to erase the shame of being forced to steal as a small child—or the fact that he’s an orphan with no status. If he ever wants to feel equal to his beautiful and generous friend Kirstyn, he must leave Hagenheim and seek his fortune.
Yet once Aladdin departs, Lady Kirstyn becomes a pawn in a terrible plot. Now, Aladdin and Kirstyn must rely on their bond to save her from unexpected danger. But will saving Kirstyn cost Aladdin his newfound status and everything he’s worked so hard to obtain?

An enchanting new version of the well-known tale, The Orphan’s Wish tells a story of courage and loyalty, friendship and love, and reminds us what “family” really means.

After a hiatus of over a year, this new Dickerson Fairytale retelling came out.   I have to admit I was not very keen on the last two books, The Silent Songbird and The Noble Servant. With this one though, I would say things are back on form, as we Brits would say.
I don't know the story of Aladdin well, which this is a retelling of, but I thought it kept true to the spirit of what I know of the story, including a Genie, of sorts.

It follows Kristyn, one of the 8 children of the Duke and Duchess of Hagenhiem (the family which feature in most of the other stories in this series). She has a severe dose of Middle Child syndrome. She's quiet, a little shy, and feels she often isn't noticed by her parents, especially when her naughty younger siblings take all the attention.
Her only real friend is Aladdin, a young Saracen boy who was rescued from the Holy Land from a band of thieves, as a child, and bought to Germany by a pilgrim (NOT a Crusader: there were no Crusades in the Middle East at that time), and a priest.

Kristyn and Aladdin play together as children, striking up a lasting friendship. His intelligence eventually comes to the attention of Kristyn's father, who hires him. Aladdin however, strives for better things. He wants to make his fortune to prove himself worthy of love and marriage, and goes off to become a merchant: and he can't do that as a Duke's steward.

Over the years, many adventures follow, as love and faith are tested, and the story explores a number of important themes, including self-worth, identity and how the past can influence the future.
For example, everyone says Aladdin is 'perfect', because he's smart, honest, and good at almost everything: and that sets up an expectation of perfection: something which is, of course unattainable. He has to really mature and learn about life to realise that.
I also rather appreciated the fact that the Romance elements were more in the background this this novel. It wasn't just mushy kissing or longing looks all the time. The romance developed over time, and the hero and heroine were apart for long periods.

I was initially concerned that the main conflict of the story seemed to be resolved halfway through: but it was not, and there was enough tension through the rest of it.
Apart from a couple of details which I wasn't sure about historically and the occasional use of the word 'gotten', there wasn't much I found objectionable in this story.
Very enjoyable and recommended to fans of Fairy-Tale retellings, Medieval stories, and books by this author.

I requested this title from the publisher via Booklook Bloggers, and purchased the audio book of my own volition. I was not required to write a positive review and all opinions expressed are my own