Christian Fiction by Century- Part 2. Conquest to the Tudors

Taking my cue from other Bloggers, I'm making a list of Christian Fiction books arranged by Century and Historical Period. I have several such lists on Pinterest, arranged by country, which you can visit here.

This one covers the entirely of the Middle Ages, from the Norman Conquest of 1066 to the 15th Century Reformation.

From the most famous date in English History to the end of the Twelfth Century- also incidentally the year in which King Richard the Lionheart died.

The period of the Crusades in the Middle East, which ended in the late thirteenth century, and books which relate to the Magna Carta of 1215, as well as the Robin Hood legends.

Books set in this period, but not related to any of the above. Includes general historical Fiction and Romance. Alongside the Magna Carta, this was the period in which the England Parliament was established, in which King Edward Longshanks tried to conquer Scotland: and also the century in which Italian poet Dante wrote his Divine Comedy (which is not meant to be funny).

This famous period saw the beginning of the Hundred Year's War and the Black Death: it was also the age of Chaucer, and is well represented in fiction.

The end of this century marked the ascension of the first Tudor King of England, in 1485, which is a useful cut off point. Its before the Reformation, during the period known as the European Renaissance. Yes, the Renaissance is counted as having begun in 14th century.

My final list is for novels which are set in any of the centuries outlined above, but are Historical Mystery novels, rather than traditional historical Fiction. All except the book shown at the very bottom are set in 14th century England or France.
The novel right at the bottom of the list is set in 12th century Russia. There are no more books in the series now, but hopefully there will be in future. 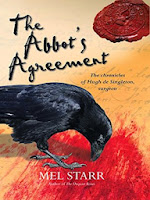