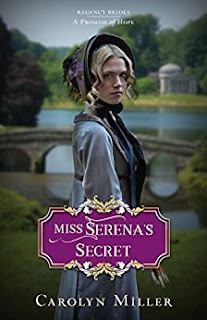 With devastating scars in her past, Serena Winthrop is sure no man can be trusted—especially not men like the far-too-smooth Viscount Carmichael. His reputation as a charmer and a gambler is everything she despises. And the young artist makes sure that this disreputable heir to an Earldom knows of her deep disapproval whenever they encounter one another.

Henry, Lord Carmichael, is perfectly aware of his charms to the women of the ton. He's gambled with plenty of their hearts as easily as he does their husband's money—it's all in good fun to him. But lately he's been wondering if there's more to life—and confronting the idea that his actions might not prove worthy of the admirable wives his friends have found.

When Serena's brother-in-law asks his best friend to protect his young ward, Henry promises to be on his best behavior and not woo her. But the more he learns of her, the more he realizes she might be his best reason for changing his character. Then the lady's art leads her to London infamy. Now Henry must choose between the life mapped out for him as the Earl apparent, and the love of his life. And Serena's secret may mean the end of his titled family line.

Carolyn Miller became one of my favourite Regency authors with her first series, and this second series is proving to be just as good. I love her rich plots full of historical detail, witty dialogue and treatment of flawed, yet sympathetic characters. Plus, the faith elements are woven seamlessly into the story without appearing too preachy.

This story followed Serena, the younger sister of Katherine Winthrop from the last story, and the male protagonist is one of Johnathan Curlew 's (the hero from that story) friends. Henry, Viscount Carmichael. I won't call him a rake, he seemed to be more of a lovable rogue at the beginning.

He's a struggling nobleman commissioned by his friend John to look out for his young sister in law, Serena. She's supposed to be very young. No more than about 18 or 19, or something, and recently escaped an unfortunate situation involving a sleazy Art Teacher.. Serena is a talented artist: although her negative experience and the censure of society leave her unsure of her vocation.

Many adventures, rendezvous, polite dinners and society functions later, and of course Serena and Henry (one of my favourite names), are in love, but there's much keeping them apart. Henry's estate is struggling, his father threatens to disown him if he does not marry the person he wants, and Serena wants nothing to do with a man who gambles: nor does she believe he can ever trust a man again. Although Henry is very sweet, kind and reaches out to her with acceptance, and introduces her to his family.
His sister and her two lovable children: lovable and typically forthright, who immediately ask of their new friend is going to marry their favourite Uncle.

The title, in some sense refers to 'secrets' or rather the difficulties that have to be overcome on both sides,. Henry's problems are not a 'secret' per-se, but he wants to change to earn the love of a good woman: and because he knows he's not the man he wants to be. He needs to grow up and face the responsibility of running his estate, only to be faced with illness in his family.
Again, there were shades of the Classics, and Austen here: but the novel is not just aping them. Its an independent creation.

As before, I loved how the landscape and details about the region were used in this story: in this case its a mention of a local stone, a type of Agate which is only found in parts of the county of Derbyshire. One would almost not believe the author is, in fact, Australian.

The only minor niggle that I had (which other reviewers have pointed out), is some uncertainty over the precise details of certain events relating to Serena, and a hint at some behaviour on the part of Henry which did not seem consistent with the way he was presented in the story before. I just could not really believe he had done such a thing before his reformation. Also, younger readers might need to be aware of a couple of scenes towards the end relating to adult themes, and the consummation of marriages. There is nothing graphic, but might be a bit embarrassing for some.

Overall though, this was another wonderful story and addition to the latest series. I downloaded an ebook of this title courtesy of Kregel Blog Tours and was not required to write a positive review, all opinions expressed are my own.