I was going to feature the book I am about to start reading on my Kindle, but instead I decided to feature a book which I just purchased on Kindle on sale. I've read it in paperback (parts of it), but I've been after the Kindle edition for years.

The White Horse King is a non-fiction biography of the Saxon King Alfred the Great which was published way back in 2009. As far as I know, its the only biography of a major figure in Medieval British history from any major US based Christian Publisher.

The title, incidentally, pays homage to G.K.Chesterton, an author from the early part of the 20th century and creator of the Father Brown stories. He also wrote a poem about King Alfred called The Ballad of the White Horse, written in 1911. You can listen to it read out on Youtube, or read it for yourself, here.

The unlikely king who saved England.

Down swept the Vikings from the frigid North. Across the English coastlands and countryside they raided, torched, murdered, and destroyed all in their path. Farmers, monks, and soldiers all fell bloody under the Viking sword, hammer, and axe.

Then, when the hour was most desperate, came an unlikely hero. King Alfred rallied the battered and bedraggled kingdoms of Britain and after decades of plotting, praying, and persisting, finally triumphed over the invaders.

Alfred's victory reverberates to this day: He sparked a literary renaissance, restructured Britain's roadways, revised the legal codes, and revived Christian learning and worship. It was Alfred's accomplishments that laid the groundwork for Britian's later glories and triumphs in literature, liturgy, and liberty.

The first line today comes from Chapter Four. Each chapter is named and this one is entitled 'Danegeld' . 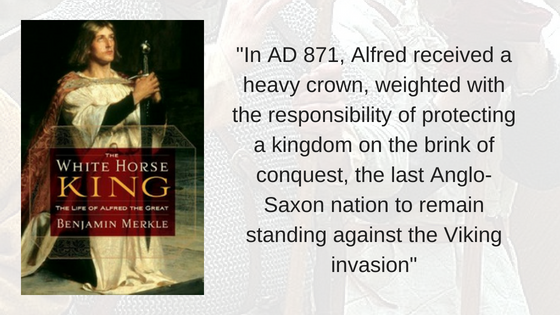 The Kindle edition of the book is, as far as I am aware, still on sale for only $1. So if you want a copy, just pop over to Amazon, or your favorite Ebook retailer, since its on sale on Nook, Kobo and Google Books as well.


Don't forget to click the Meme to see what other members of the group are reading, or comment with your own First Line.